There are three main roads in Puna. There's Upper Highway, which runs from Hilo town up to the smoldering summit of Kilauea through what's known as Upper Puna district, or simply: "Volcano". There's "The" Highway, which branches off of Upper Highway at a town called Kea'au and runs southeast through an ohia mesa then down through the jungle towards the lava flow at Kalapana. The Highway branches off at Pahoa town and crosses through an albizia forest, then papaya fields and horse farms, past the geothermal plant towards the tide pools of Kapoho. Then there's Red Road, which runs alongside the ocean and connects Kapoho, which sits at the easternmost point of the Big Island, with Kalapana, in the south.

The reason for all this geography is…well, surety. It is helpful to know that if you get lost in Puna you only need to find what looks like a real road and follow it either mau’ka (toward the mountain) or makai (toward the sea) in order to find your way home. As in transportation as in life: all small roads lead to bigger ones. 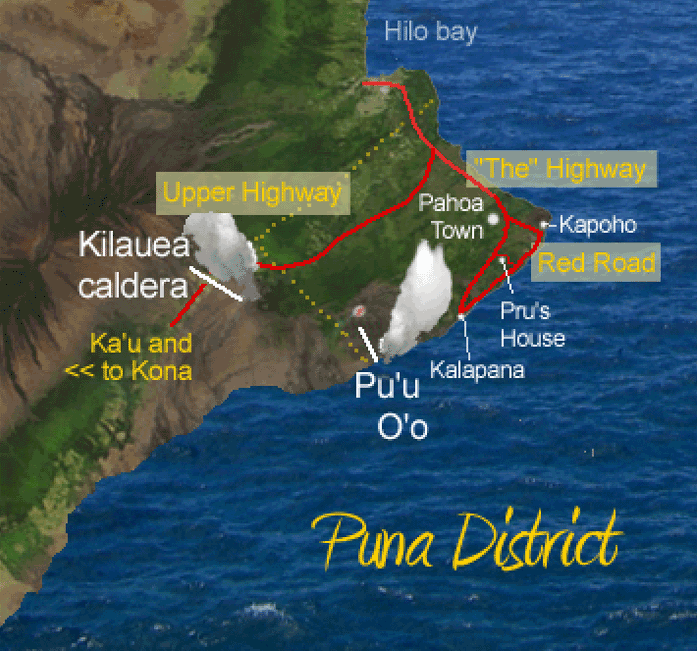 Prudence lived off of the Highway about midway between Pahoa Town and the lava flow, just below the crest of the rift zone. The rift is a ridge of land that sits atop the underbelly of the volcano, where subtle shifts in the crust of the land can send lava spilling out without warning. It happened in 1960 when Kapoho village got wiped out, the slow-moving lava kissing a wide swath of the adjacent 1955 flow as it took out the post office, grocery store and Kapoho's only restaurant. More famously it happened in the south, in 1987, when a small crater on the slopes of Kilauea called Pu’u O’o suddenly erupted and sent a slow army of oozing fiery rock to fill in all of Kaimu Bay and consume the fishing and surfing village of Kalapana.

Daily life in Puna is governed by Pele, fickle goddess of the volcano, and her daily administrators are the wind, the rain and the sun. All benefit arises from that knowledge. And all good things stem from its acceptance. Tragedy stems from failing to give the elements their rightful due. Daily life in Puna, therefore, is unpredictable.

Along the rift zone, steam seeps out of the earth through vents that offset pressure from the magnificent bed of lava atop which the Puna District (and much of the Big Island, for that matter) sits. Down at the very end of the Highway, past what’s left of Kalapana Town and across the Kaimu lava field, life rages in its authentic form: in an elegant, violent symphony of the clashing of the elements. Looking down upon the new black lands she is creating from her temporary residence at Pu’u O’o, Pele smiles.

This is the flow that Prudence sees from her back lanai – a lugubrious, ever-churning, unpredictable surge of nature, evidenced by a steady plume of smoke which, from a distance, appears almost gentle. 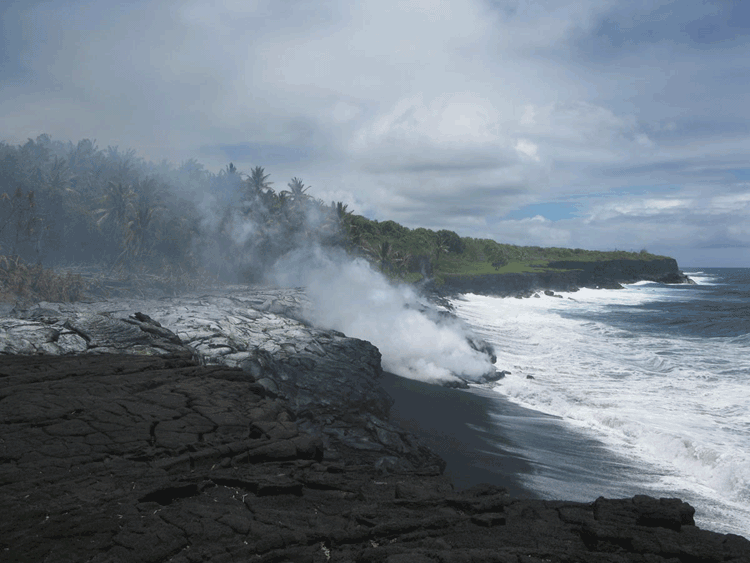 The Pu’u O’o flow preceded Pru’s arrival on the Big Island by more than a decade. In fact, it was the volcano which brought her to Hawai'i for the first time, lured as if by unforeseen forces and accompanied, somewhat regrettably in retrospect, by Kyle Weatherly. Having flown past the smoldering tower of Popocatépetl on one of his missionary trips to Mexico, Kyle was seduced by the power of volcanoes and had an urge to see lava up close. So he brought Prudence to Puna to bear witness alongside him.

Pru hadn’t seen or heard from Kyle in years; nor did she want to. He was part of her personal archives – history locked away in a box, intended to be forgotten until her death, reminisced about perhaps in scraps only after she was gone.

Yet he was coming back on island soon, and his impending arrival had her insides tied into minor knots.

Perhaps Auntie Lulu was right, though: maybe he’d changed. Maybe when he shows up at Kukio Kai, the spiritual center down on Red Road, he’ll be improved somehow. Perhaps he's become a better man. 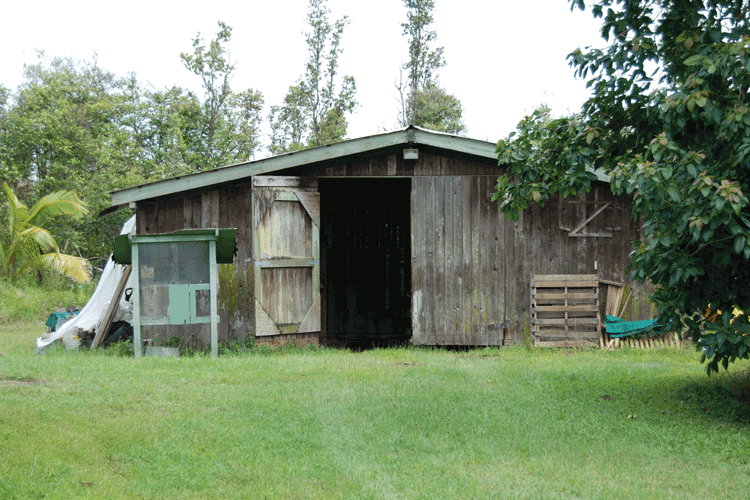 To get to the Highway from Pru’s house you first have to exit her “driveway”, which is really just her yard: a swath of rocky grass where people park when they come to visit. You pass between two rainbow eucalyptus trees that mark the entry to the yard out onto a bumpy one lane road that cuts through the jungle. A quarter mile at the other end, the private lane meets up with Ohalani Road.

Ohalani is a serpentine stretch of asphalt, barely wide enough for two cars. It connects the Highway, which runs along lava rift zone, with Red Road, which follows the jagged outline of the coast. The nice thing about living along Ohalani Road is that you can choose your route to suit your mood.  The Red Road is undulating and exciting; its gentle hills traverse the hala jungles, kamani groves and open lava fields. Those who have respect for the land drive the Red Road at a gentle pace, giving in to each curve and indentation in the road as a sort of religion, the whitewater breezes of the sea serving as their anointment. The Highway, on the other hand, is tactical and efficient, a straight shot from Pahoa Town to what remains of Kalapana.

Pru kept her truck under a lean-to styled garage at one end of the yard. It was a simple and perfunctory arrangement: with its back to the trades, it kept her truck and garden equipment dry and helped fight rust. (In Puna, everything either molds or rusts eventually.) With its simple barnyard front there were no rolling doors or overhead electricals to mess with; everything in the garage was easily accessed through a pair of basic doors.

Pru crossed the sunny yard and climbed into her truck. She drove across the rocky lawn, passed between the eucalyptus, their shards of bark peeling off to reveal rainbow hues of pastel colored trunk. She drove through the jungle and then stopped at Ohalani Road.

Up or down? she pondered.

Ordinarily there was no question: she’d stop; look; turn; proceed.

Today, though: indecision. Was it subliminal? Kukio Kai, the spiritual retreat where Kyle was going to teach, was down on Red Road, a few miles below the intersection with Ohalani. Pru didn’t want anymore reminders of the “Rinpoche’s”  impending visit and so her brain told her not to pass by the place.

Furthermore, and far more important, today was about Manu, the old poet who lived in the ‘ohana on Prudence's property. There was going to be a gathering down at Uncle Billy’s, near Kalapana, to discuss a memorial for Manu. Soon after Manu died he was buried in one of the old cemeteries that dotted the sides of Red Road – and there'd been a service, but it was small, mostly attended by kanaka, the native Hawaiians. Manu’s friends and extended family wanted to do something for all of Puna – to bring together the community to talk story and dance hula and eat, to celebrate Manu’s life in a grand manner befitting the elder and his legacy.

Prudence cranked the steering wheel to the right. She’d chosen the efficient route.

At the top of Ohalani road she turned left onto the Highway and sped downhill in the direction of what remained of Kalapana. On either side of the Highway, puffs of airy smoke sputtered up here and there, giving off steam and heat, marking the living Earth as it slumbered beneath the rift. 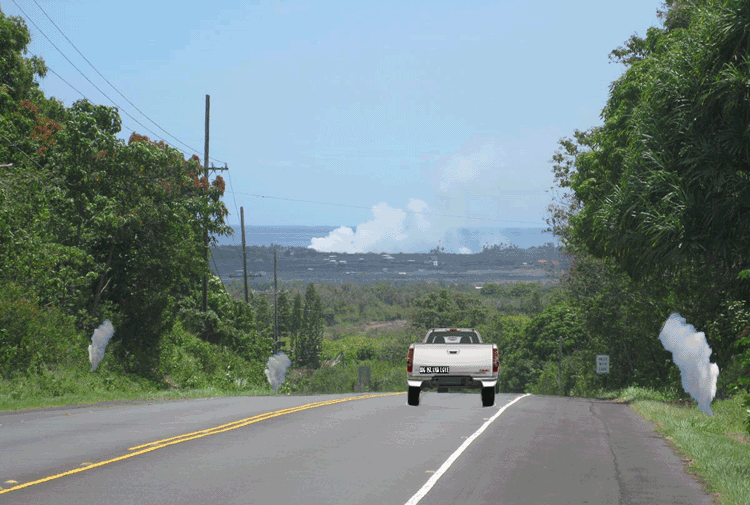