It’s no understatement to say that taking the Red Road from Ohalani Road all the way up to Four Corners is taking the long way to get to Hilo. It involves driving two sides of a right triangle instead of taking the hypotenuse, which in this case would be the highway. 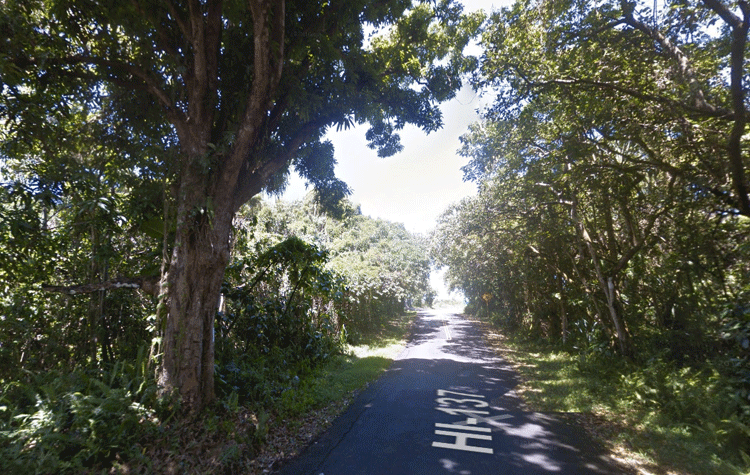 It so happened that this was Thursday, and on Tuesdays and Thursdays a local woman named Punalu‘u delivered a small stash of baked goods to the Four Corners General Store and also to the Kalapana Café down at the end of the road. On Wednesdays and Saturdays Punalu‘u sold her sweets at the outdoor markets.

Ordinarily Prudence wasn’t one to go for baked carbohydrates slathered in sugar but this day seemed exceptional to her – exceptionally weird, not exceptionally good, what with the blend of the volcanic torrent that blew through Grace’s house the night before; the wicked dreams; the lemon pie; Matthew’s weed...

There resided within Prudence an odd amalgam of sensations. It was like the periodic table had sloughed off all its elements and they’d wended their way into her bloodstream.

And to say nothing of the drought, which had parched the landscape and left her feeling dry and dehydrated herself. (Speaking of which, she could barely remember the last time she had sex…Oh, yes, never mind; she remembered: he was from Waimea, kind of gangly, and his house smelled musty and was dark.)

The bamboo in the yard was denuded and still; the grass was crunchy and brown. Fruit trees sagged and the impatiens that used to line the shady jungle road had withered away to nothing. Even stink maile, which is the cockroach of the plant community, was starting to die in places.

The only antidote for this total disruption was a cinnamon-laced sticky bun and iced coffee.

Prudence took the winding Red Road up past the Pohoiki intersection and headed onto the flat stretch that passes through the 1955 flow. Even the lava looked thirsty, begging for a taste of the broad blue ocean off to the right. The wide basalt field had faded in the drought, its charcoal grey color gone a shade lighter in tone.

On the left, Green Lake Mountain was more like Tan Lake Mountain. Just after that is the Four Corners General Store. When Prudence pulled into the parking lot a cloud of red and black dust kicked up in a fury.

“Aloha, Pru,” said Tita ‘Aiana as Prudence came in through the door.

“Aloha.” Prudence grabbed a paper napkin from a dispenser on one of the tables and dabbed her forehead. Off in the corner, alone, making slow work of a malasada, sat Fishbone. Prudence saw him and waved hello.

Fishbone raised his hand slowly and held it aloft for a few seconds. Not wishing to risk breaking a smile, he simply nodded.

Prudence approached the counter. “A million dollars and a decent man.” She waddled the napkin and threw it in the trash. “But I’ll take a sticky bun and a large iced coffee.” 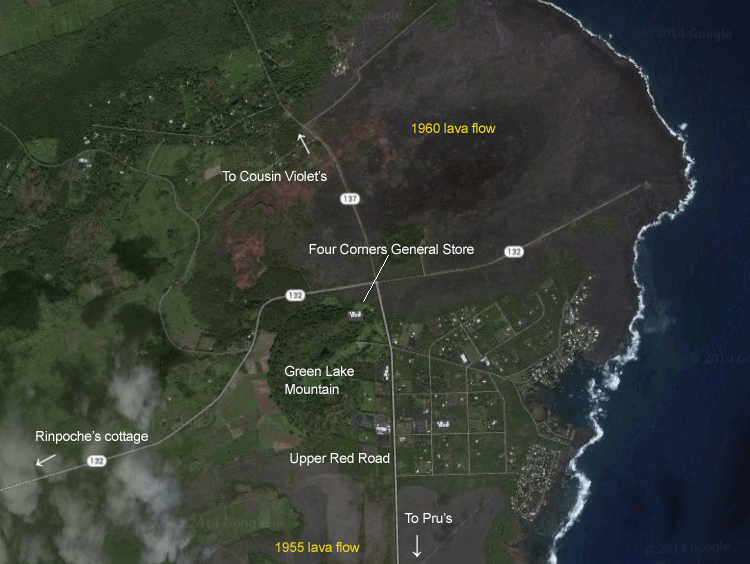 Prudence left the café parking lot. She turned left onto Pahoa-Kapoho Road and drove past the scrubby Green Lake Mountain into the area of papaya fields.

Up ahead she saw a man jogging dodgily along the side of the road and wearing skimpy running shorts and a tanktop. His salt and pepper hair was  pulled back by an elastic headband.

As she got closer she said aloud to herself, “Who is that crazy f—?” And then she realized: Oh lord, go figure.

She resisted all urges to keep on driving – that wouldn’t have been pono – so she slowed and hollered out the window as she drove up next to him: “Need a ride?”

The Rinpoche stopped and nodded his head. He came to the window as Pru pulled her truck to the side of the road. He looked as if the heat of the day had gotten the better of him. He nodded his head again and said eagerly: “Yes, please.”

Prudence pulled her purse beside her and put the uneaten portion of her sticky bun inside it. “Warm enough for you?” she asked as the Rinpoche climbed in.

“Nice,” said Prudence. “Is that a Sanskrit expression? Something like, Thank the blessed Shiva for the sun?”

“It’s 90 degrees and sunny and you’re out for a run. Some wounds are self-inflicted, Kyle.”

“Ha.” She pulled onto the road and gunned the engine. “If you’re a Rinpoche I’m the blessed Virgin Mary.” There was a moment of silence. “Where are you going, by the way?”

“Just up the road. I rented a cottage by Pu’u Noelani. It’s across from the papaya fields, before the big bend in the road.”

Another bout of silence.

“Thank you for picking me up,” he finally said.

“You don’t have to thank me. You looked like you were suffering.” 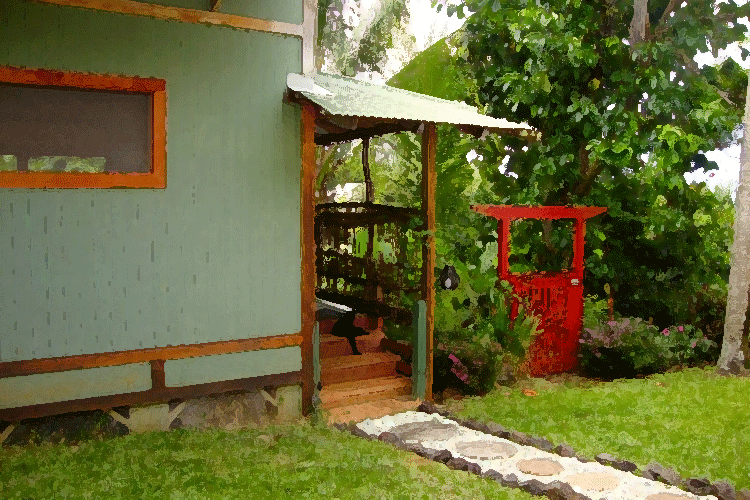 When they reached his house, Prudence put the truck in park and the Rinpoche got out.

“Kyle,” she said, “wait.” She wasn’t going to do it, except all she could hear inside her head was Auntie Lulu’s request (“Will you talk to him?”) and the posthumous whispers of Manu, urging her to do what she needed to do. Begrudgingly, she asked if he and Pualani would like to come over for dinner.

The Rinpoche brightened, the invitation restoring in him much of what the sun had depleted.

Prudence pointed an index finger in the air. “Not you. You and Pualani.”

The Rinpoche shut the passenger door of the truck and then came around the front and stood beside Pru’s open window. “That’s kind of you, Prudence. We would be delighted to join you.”

“Fine. Sunday at six,” Pru told him. “If that works for your schedules.”

The Rinpoche grinned, a luring, falsified grin. “I sensed there was a thawing between us. If you’ll excuse such a bad metaphor on a hot, rain-starved island.” He laid his palms around the top of the door and leaned forward. “Would you like to come in? I’ll shower and then we can spend some quality time together.”

Prudence stared at him, both incredulous and convinced.

“Kyle,” she replied. “There isn’t a desert in this world wide enough to make me want for a cup of your water.”

He stepped back. “That’s unduly harsh.”

“I know. But I’m not the same girl who found herself pregnant and alone, riding out of Mexico on the back of a stinking donkey.”

The Rinpoche paused, then remarked: “I think it was a mule.”

“I’m pretty sure it was a mule. Remember the sign over his barn: “Pepe’s Mules”.

“He had a sign in English that said ‘Pepe’s Mules’?”

“How am I supposed to remember a thing like that?”

“The same way you should remember all the fine details of your life: as they happened. Not through some fantasy filter of how you imagined them.”

“So that’s what you think of me?” She was unnerved. “I’m the fabulist?” 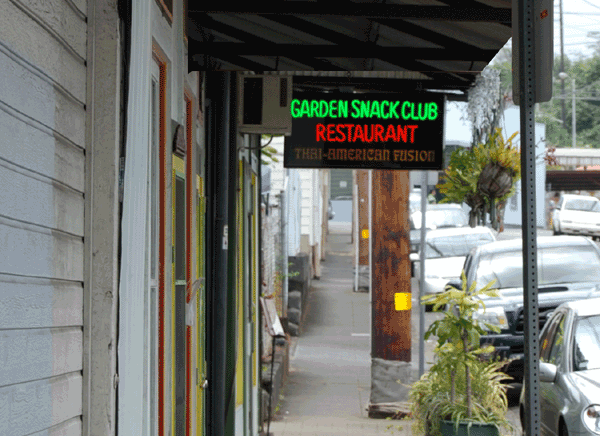 Prudence entered the Garden Snack Club in a blustery fit, already a few minutes late for her shift. The bell over the screen door jangled nervously as she came in.

Solia was there at the counter in front of the standing Buddha going through her tickets and settling her receipts. “Aloha, Pru. Howzit?”

An ennervated grunt was the best Pru could muster. Fortunately there were no customers in the restaurant. “Tell me,” she said,” what’s the slowest, most unsavory method for castrating a greedy narcissist?”