All of Lower Puna showed up for Manu’s luau. The Punatics left their houses and took to Red Road and the Highway, a four-wheel chorus of pickup trucks and rusted-out Punatic vehicles traversing the district on a pilgrimage. From way up high the traffic looked like ants marching over patches of lava and through thickets to converge upon the mother nest. 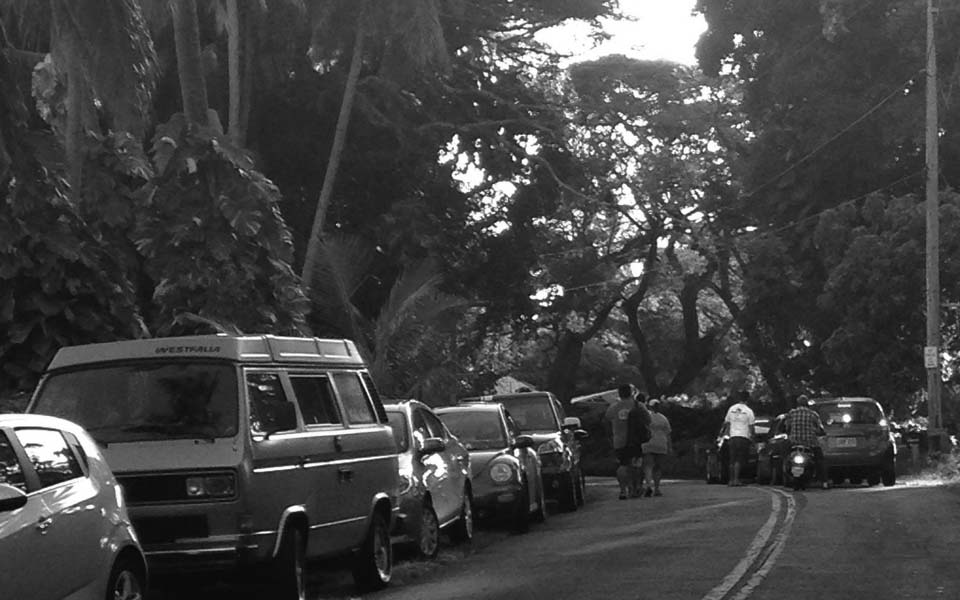 People began arriving just before dusk. By sunset, the entire length of Prudence’s driveway was lined with vehicles. The overflow stretched out in two directions along Ohalani Road, as well, both sides of the street chock full almost all the way up to the Highway.

As you approached Prudence’s place on foot, you found yourself walking a long, lovely driveway that separated her sacred realm from the rest of the world. Tall fractal trees canopied the two lanes of gravel that cut through the jungly realm. Had you never walked the length of Prudence’s driveway before you’d be amazed at how it stirred in you the sensation of being pulled back into the womb. Or in tonight’s case, toward a sort of festive heaven. 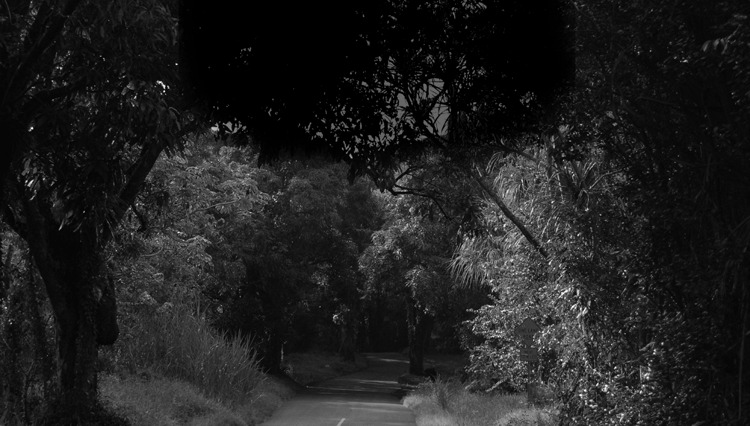 I’ilani and her daughter, June, arrived remarkably late at Prudence’s. They moved hurriedly along the driveway in the darkness. Patches of the roadway were lit by moonlight but for most of it they had only the dim lights of their cell phones to light the way. I’ilani struggled with a big tray of laulau she'd made while June juggled the two phones and a bag of leis and a maile garland.

There had been a crisis at the Garden Snack Club earlier that morning. Kay, the owner, was cooking for the second day in the row so that (in theory at least) I’ilani could help with final preparations for the luau. But from the moment Kay stepped through the screen door of the restaurant her day turned into a series of improbable, compounding errors: first the propane for the main stove ran out; then the plumbing stopped up; then as she tried to do her prep work she couldn’t remember what to prep and how, and had somehow misplaced I'ilani's notes. (How she wished she hadn’t told I’ilani she’d take of the prep herself.) At ten-thirty she called I’ilani frantically and asked her to come help sort things out. It was as if a stealth worm had gotten into her brain and a surge of angry quarks and leptons had disrupted the cosmic makeup of the day. 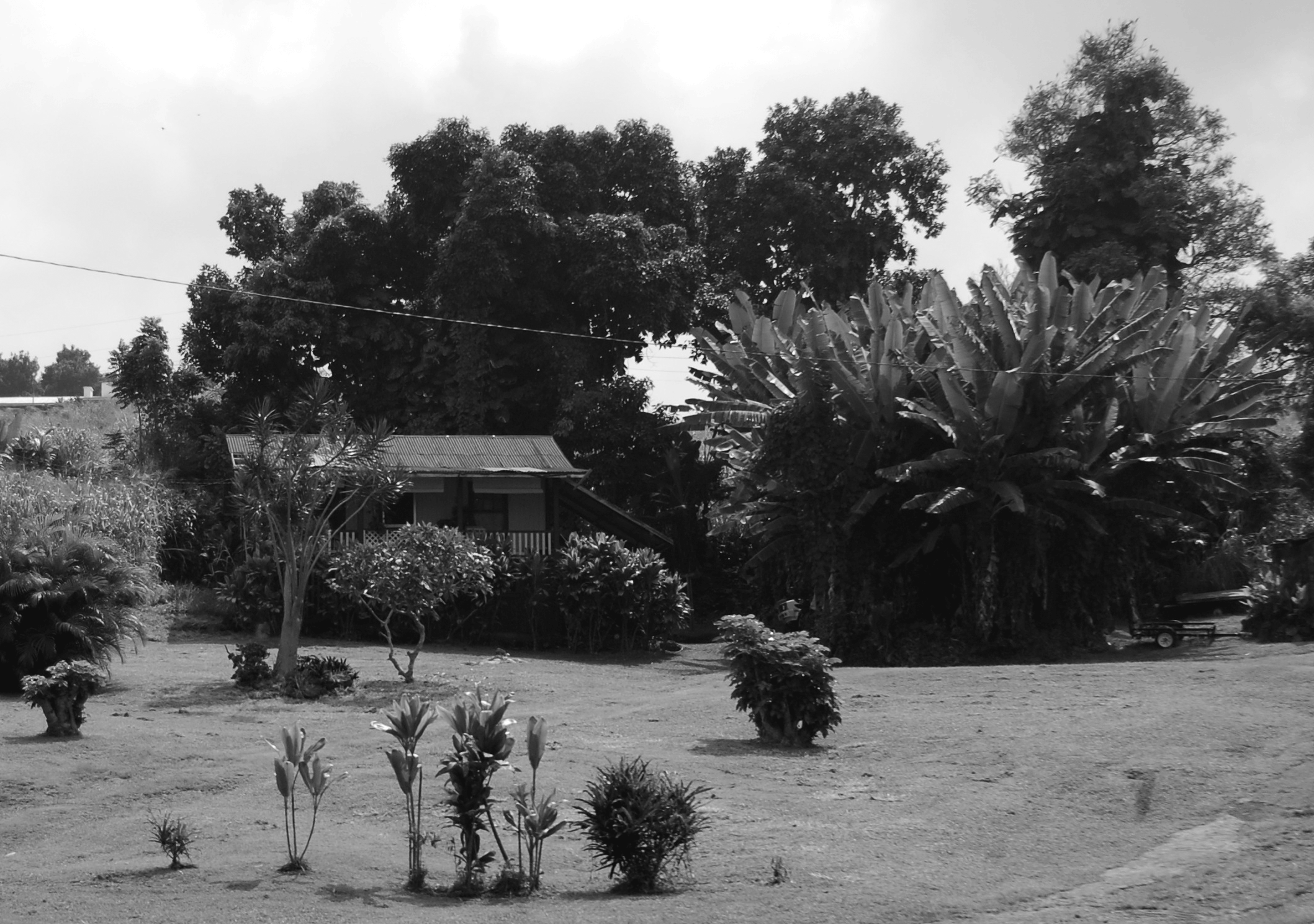 I’ilani lived above Hilo along the old Saddle Road, just above town, where urbanity started dissipating into the wilds of the Mauna Kea o’hia forest. Her daughter watched as she tried to calm the upended Kay over the telephone, not quite knowing what was transpiring. When she hung up, the young girl asked excitedly: “Are we going to Auntie Pru’s now?”

“No,” I’ilani told her. “Mrs Kay needs help at the restaurant first.”

I’ilani rinsed off in the shower, put a few handfuls of ginger water in her long hair and brushed it out. She grabbed her pareo for the luau then hurriedly stocked her car with a spare propane tank, her address book, the deep dish of laulau…and…”June!” They drove down the hill then stopped and parked along Punaloa Street, near the corner of Ponahawai.

I’ilani fully expected the fixes to be quick, and she told Kay as much while she lugged the large spare tank of propane through the dining room.

Kay stood at the doorway to the kitchen with a blank stare on her face. “I don’t understand what’s going on,” she said helplessly.

“Maybe you just have anxiety about cooking. It’s been a while.”

“But yesterday everything went fine. For the most part. And what about the plumbing? And the propane?”

“Sometimes we have these kind of problems. The big propane was plenty full the other day so no way it’s gonna run out. So I don’t know, maybe it’s the line from the tank. Anyway use this one. June bug,” she called to her daughter, “go and hook this up.” She turned back to Kay. “I called Robert what-his-name, you know…the plumber. Called him from the car. He’s on his way down. I can’t stay to wait for him, though. We’re supposed to be at Ohalani Road at noon.” 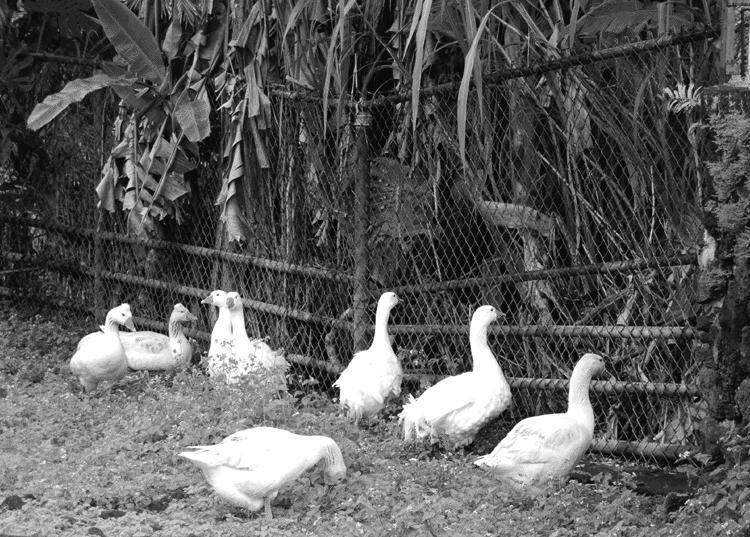 I’ilani led Kay toward the cooking table to get her straightened out. As she was looking through the binder for her list of basic prep work—“Where’s the cheat sheet?”—the telephone rang.

I’ilani hurried around into the dining room and answered. Right away she said, “Unh? Who’s this?...Oh?!...”

It was Solia, the other waitress. She was 40 years old and lived with her husband in Pepeekeo, along the Belt Road, in the direction of Waimea. She was one of the first waitresses Kay hired and she’d been at the Garden Snack Club ever since. She was due in at eleven to set up for lunch and then would work the rest of the day. It was Friday and usually she is off on Fridays but she offered to work this one for Pru because of Manu’s luau.

“You what?” I’ilani struggled to hear what Solia was saying. “You ok?”

Solia’s car was stuck alongside the Belt Road, not far from the Whistling Bridge.

Kay raised her hands in curiosity. I’ilani shook her hand back and spoke loudly into the phone: “But you’re coming in, girl, yes? … I know but maybe you leave your car there and hitch a ride into town…Or catch the Hele-On and call a tow truck…Ah-h-h…” I’ilani rocked slightly back and forth on her heels. “Ok, then…Ok...You want I come get you?...Ok…Ok…Ok.”

Kay approached. “What on earth—?”

“She swerved to miss a gaggle of geese. Ran her car into the ditch.”

“Ah. Shame.” Kay went back to the binder of annotated recipes, leafing through it looking for the cheat sheet. “Is she coming in to work?”

“Hell yes, she’s coming in. I can not miss this luau. The men from Ke Kai O Kahiki gonna hula.” 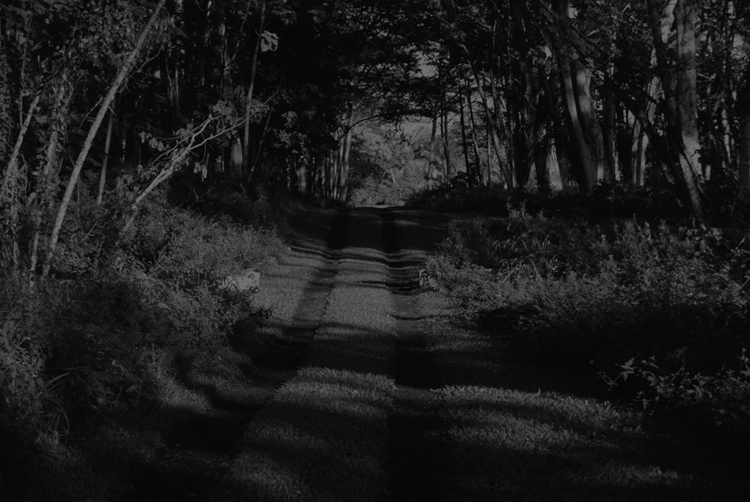 By the time I’ilani and June reached the pair of rainbow eucalyptus trees that marked the entrance to Prudence’s property, the full force of the festivities were in the air. “Fine time for the flashlight to die, yeah?” She stopped to catch her breath. “Don’t tell nobody the laulau fell on the ground.”

“From Mother Earth to the mouth and back again…It’s all good.”

They walked across the lawn, which was packed with vehicles parked at all sorts of angles. The smell of charring embers from the imu mingled with the scent of roasted meat and wafted up from down below the hillside. There on top of the hill every light in Prudence’s small white house was illuminated. The lanai was strung in multi-colored lights. It was filled with people chatting and drinking and smoking pakalolo. Outside the house, an array of Punatics wandered the lawn, here and there trying to avoid the oily vapor of tiki torches, whose black tissues of smoke were being blown about by a fickle wind.

Leading down the hillside, along the makeshift drive that led to the bottom of the property, were more tiki torches lighting the route to the luau. I’ilani and June crested the hill and looked down upon the grounds.

Strains of Uncle Kawaimomona’s amplified ukulele and somebody else’s guitar could be heard amid all the voices like a beckoning. A thousand people had converged on the few acres beneath Prudence’s house. They moved amid the food and entertainment tents, the jungle fire pit, Manu’s cottage, and the palm garden -- every square foot of the place was filled with celebrants. 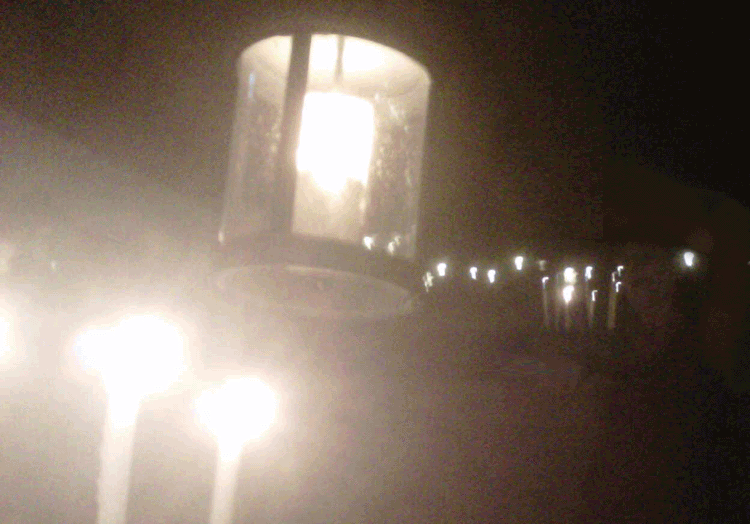 “Oh my good word,” muttered I’ilani. "Prudence must be hanging on for dear life."

They were just about to start down the hill to find Pru when Cousin Violet appeared out of nowhere.

“Aloha, I’ilani.” Violet approached June and put her slender fingertips on the girl’s shoulder. “Aloha, June of the moon of the Four Hundred.”

“She’s not freaking out with all these people?”

“On the contrary, she’s quite content. She’s having a lovely time.”

“Do you know where she is?”

“No, I don’t know that. But she’ll find you soon enough. In the meantime…” Approaching the top of the hill was a husky framed figure that I’ilani couldn’t make out in the kaleidoscopic light. “I brought you some help,” Violet told her. “You walked all the way from Ohalani Road carrying those pu’pus. Let him take them from here.”

The figure stepped into the light of the tiki torch. All he was wearing was a short pareo around his waist in shades of orange with threads of cobalt blue. He was the same age as I’ilani, a little taller than she, and built to bring down a house. Tattoos painted his big upper arms and shoulders in great swirls of history and natural elements: seas, winds, cryptic patterns…

“He trains with your favorite halau.”

I’ilani stared at the man, whose name is Kamoku. In a completely unconscious, autonomic response, she dropped the laulau onto the ground for the second time that night. Stunned, she said almost inaudibly: “I know.”