Kyle Weatherly, aka Rinpoche the Magnificent, stood impatiently at the KTA grocery store on the corner of Keawe and Mamo Streets waiting for Pualani, from the spiritual center, to pick him up.

The sun was beating down through a wide patch of blue sky above Hilo town. He realized too late that it was too warm for a silk tunic and linen pants. He looked forward to getting down to the retreat along Red Road, where ocean breezes carried in by the tradewinds had a mild cooling effect. 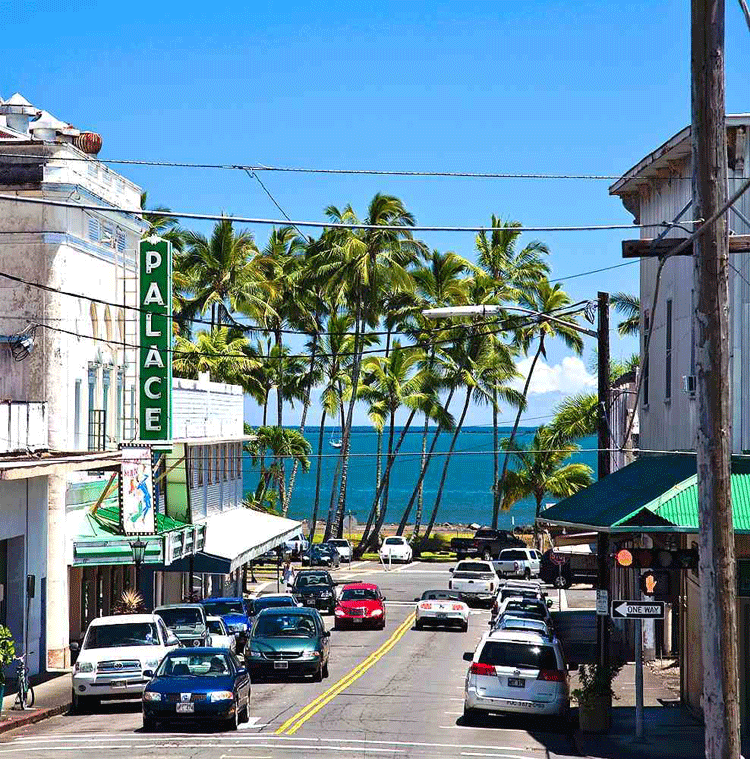 Kyle was a reasonably attractive man. Or had been, before he found Enlightenment and transformed himself into a Rinpoche. He was nearing fifty now, and both reason and appearance were waning. Time had woven countless threads of grey into his black hair, which he kept brushed behind his ears with an oily sort of resistance. His body was in decent shape because he did yoga daily and managed to get some running in from time to time. As an object of inspiration and desire, he still had some shelf life but it was rapidly approaching an expiration date.

He stepped out from the shade of the overhang and looked down the block at the Hilo market. Shoppers were wandering in and out of the canopied farmers’ market stalls on both sides of the street. Tourists meandered around the faithful, slightly run down town carrying fistfuls of waxy red anthuriums and marveling at how affordable and shiny they were. Beyond that, across the Bayfront road, outrigger canoe teams plied the bay while women holding umbrellas watched from the shore. It was all a little too precious for the Rinpoche – this sort of backwards, rambling, unintentional existence.

But what a marvelous opportunity.

He closed his eyes and stepped back into the shade, repeating a serenity mantra silently in his head. On the nth iteration a huge pickup truck with a deafening diesel engine rolled to a stop in front of him. The entire entryway to the grocery store vibrated from the rumbling of the engine.

Rinpoche opened his eyes in annoyance and tried to peer around the vehicle, which was essentially a studio apartment suspended atop four massively grooved tires which were in turn supported by a quad of shock absorbers that could land an airplane. He took a few steps sideways to escape the exhaust billowing out of the tailpipe.

“Good God,” he muttered. As he did, the passenger door of the monster truck opened up and a bubbly blonde-haired young woman hopped out. She wore a pair of snug shorts and a tank top; a busily patterned scarf was wrapped around her waist like a makeshift skirt. She landed barefoot onto the pavement and stretched out her arms: “Rinpoche?”

Kyle looked at her.

“Greetings. I’m Mimi, from the yoga studio at Kukio.”

“Oh!” He was at once confounded and a little bit turned on: that scarf around her waist was begging to be untied. They shook hands then let go. Mimi stepped back; she clasped her hands and bowed.

“Pualani was going to come get you but I told her Kam and I were coming into town, so we offered to pick you up.”

“Well, wonderful. I guess. Thank you.” He looked up at the cab of the truck: “Is this our ride?”

With a modest effort the delicate looking Mimi threw Rinpoche’s suitcase into the back of the cab beside a resting bowgun. The two of them climbed up into the truck, Mimi taking the center of the bench seat. Beside her was a large man in the driver’s seat. Kyle acclimated himself between Mimi and the passenger door, which he lumbered to pull shut. 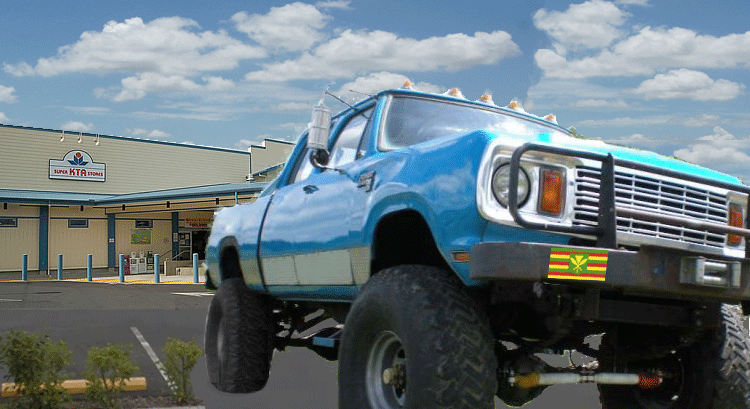 Inside, Mimi motioned to the big man. “This is my boyfriend Kam.”

Kam was a large rugged hapa, more white than islander. He was terrific looking: all muscle and beard and long hair. More imposing than menacing, though. (If that’s any consolation.) The reason he drove a truck this size, Kyle surmised, was because he couldn’t fit himself into a normal sized vehicle.

“My name is Kamakakoa. I build roads,” he said. “Nice to meet you.”

The Rinpoche nodded. Kam and Mimi looked like a mastiff and a chihuahua sitting beside each other. He couldn’t imagine them having sex.

“He’s also an excellent bow hunter. He manages the wild pigs at Kukio.”

Kam looked at the Rinpoche and grinned, big teeth and hazel eyes amid a field of frizzy black hair. “We have good pig on the island. You ever smoked a two hundred pound sow?”

“You can help today, if you want. I killed a beauty the other day for tonight's dinner.”

Mimi grabbed the Rinpoche’s hand: “It’s a dinner in your honor. The whole Kukio Kai community is thrilled that you’re here.”

“Well, I’m thrilled to be here, too. Thank you for retrieving me.”

“It’s the very least we could do,” said Mimi.

Kam put the truck in gear and thrust it forward out of the parking lot. 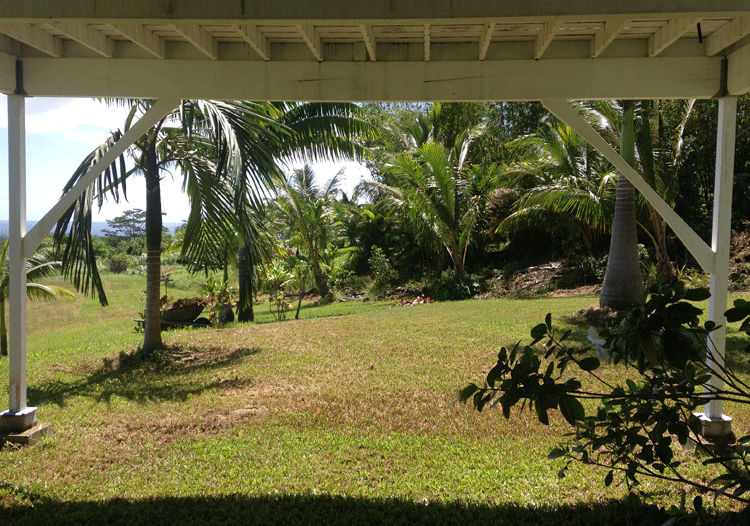 Prudence woke up on that same afternoon around one, around the time the Rinpoche was climbing into the truck. She’d slept through two passing rain showers and the departure of Lau Lau, who slipped out of her napping bed almost as gently as he’d found his way in.

The pillow where Lau Lau had rested his head still smelled like smoke from the imu. The whole napping bed, too, in fact. Prudence rolled over to one side and then back again, as if coating herself in Lau Lau’s scent. When once again on her back, she opened her eyes wide, looked upward at the eaves of the roof and smiled.

Meanwhile, Rinpoche the Magnificent was rolling down the Highway in the cab of the pig hunter’s mega-truck. He looked out the window at the cloud formations as they jostled with the sun in their never-ending partnership of the sky. Mimi was at his side and Kam the Terrific was in the driver’s seat.

The stretch of two-lane highway they were on connects Keau’u down to Pahoa town. It’s the only road in and out of lower Puna. To the regular driver of the route, it is, to be honest, a bit of a bore, an endless double yellow line stretched along grey asphalt with telephone poles zipping by at regular intervals.

A massive subdivision called Paradise Park dominates much of the journey: over a thousand one-acre home lots carved into a grid amid the scrubby woodlands, stretching several miles from the Highway to the ocean. Four main arteries connect the subdivision to the Highway, each with its own special turn lanes.

On the other side of the Highway are houses that have been erected roadside, some with gates, some simply dropped onto a barren patch of ground.

Kyle looked in awe at the extent of the development. He remembers Highway 130 as a rough patch of asphalt with nothing but cane grass and o’hia trees on either side. He nodded approvingly: Progress.

Mimi hollered something which may have been directed at the Rinpoche, but with the windows down and the wind rushing in, it wasn’t clear.

Rinpoche shrugged. Mimi leaned in. She lightly touched the strands of beads twined around his left wrist. They were an amalgam of wood, bone and hemp. She spoke directly into his ear: "I love your mala beads."

He nodded politely. With the reverb of the truck engine filling his ears and the vibration of the truck jostling his back, the Rinpoche, who had been focused on one thing only – the spinning road of opportunity moving beneath them – now found himself, despite the proximity of Kam the Pig Killer, pleasantly aroused. 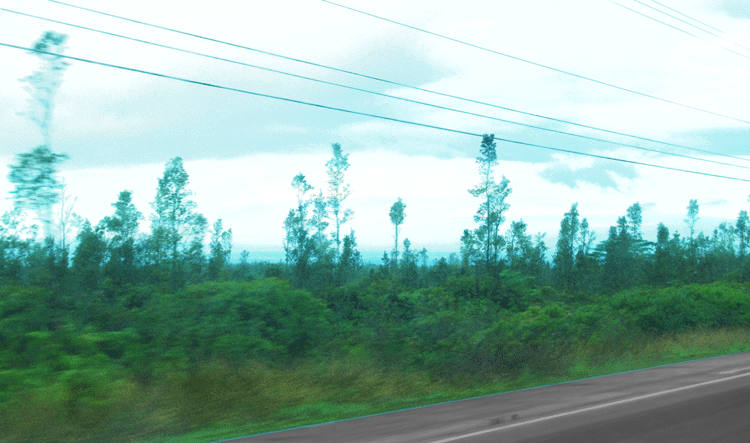