They remained that way, supine, staring out from Prudence’s napping chaise on the lanai, looking past the eaves of the house, beyond the wooden rail, all of it existing in a flickering silhouette. Hovering above the volcano, the glittery pink starlight of the Milky Way stretched itself across the lower portion of the sky.

Inside the house, a few candles flickered.

“I don’t want to weird things up between us,” Matthew told her. 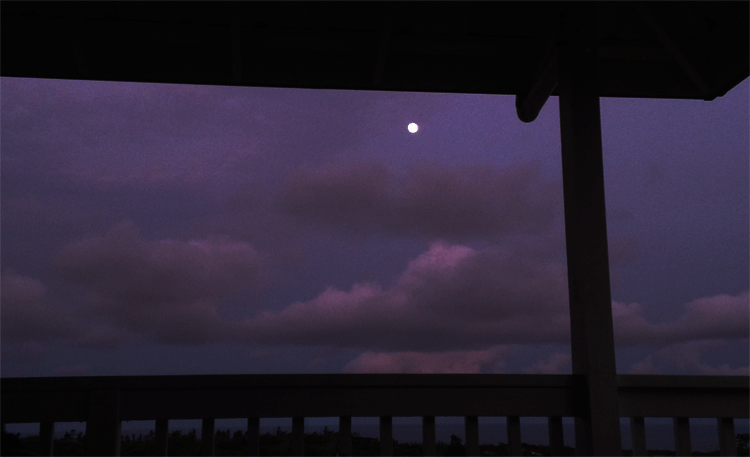 They were lying side by side. Pru’s right arm was extended, her forearm resting atop Matthew’s.  He had turned his palm facing up and the two of them were holding hands.

“You’re the only real friend I have on the island,” he said. “I don’t want to risk ruining that.”

Neither had made a move; they were simply there, aware of the tension.

Ironic: both in a state of serene calm yet in the presence of tension. “Maybe not so much tension…” Pru said. She then went on contemplating aloud, in a slow languid state, trying to accurately describe that tingling energy binding their hands. Giving in to the complexity she simply remarked, “There’s nothing wrong with two friends holding hands.”

“Oh, I know,” said Matthew, not really sure if he meant it.

Full of ease and fondness, the interlocking of their hands was laced with yearning, not so much for each other, but for someone. The long dry spell that both of them had endured was introducing potential deceits into the platonic affection passing between them.

Matthew had slowly been assuming island ways of punctuality, self-sufficiency, trying to live aloha...There was a free sort of sexuality among some of the haole hippies that he hadn't quite acclimated to, though. Not that Pru was a hippie, but she was a descendant of the tribe. She belonged to a specific branch of the Punatic species, he was quite sure – or maybe two branches...All of a sudden he didn't know. He was getting warm. In place of any silent diction in his brain there was a floating sensation, like his mind was outside his body watching over him, and his thoughts were foreign invaders.

He lifted his arms above his chest and stretched them towards the ceiling. Under the wooden eaves of the house, spotted brown geckos went after fluttering moths and little insects skittered about, attracted by the candelight. “Would you do him?” he asked.

Now. This instantaneous rejection by Prudence bears closer inspection. Clearly she wasn’t interested in Kyle Weatherly amorously. That ship had long ago left the port, never to redock against her shores.

There was however the matter of pragmatism: it had been a while since she’d been with a man; longer still that it had been any good. Kyle, in their shared youth, had been really good. Underscoring all that good, however, were adolescent yearnings, longings, the freeness, boundarylessness, open dusty roads and rustic beaches of an incendiary, novel love affair. What Kyle offered her back then was a life of possibility, something very different from what she’d grown up with. After six or eight months under his tutelage (as well as beneath and atop the finely patterned hair across his chest and down his flat belly), everything that he was encouraging her to be she believed she could be. Everything he imagined she might be she felt she was becoming. Coupled with all that optimism were three or four of the finest orgasms of her life.

Time, however, has a way of reigning in one’s historical fantasy: life comes dressed and packed to the hilt with reality checks. For Prudence they included the unwanted pregnancy, the long trip home, the years of mistrust and anger. (More so disappointment, she would probably say. There was anger at him and disappointment for herself. She expended much effort and many therapeutic nights after that trying to avoiding turning that disappointment into anger at herself. Easy it is to lay the blame on others; less so to keep it from turning onto ourselves.)

“No,” she repeated. “I wouldn’t do him.” There was a tiny bit of her that wanted to do him, but that teeny tiny bit was overridden by all the rest of him. Prudence could compartmentalize sex with a man to some degree, but when it came to Kyle she couldn’t separate the sex from – well – the actual man. When she picked him up on Kapoho Road the other day and he so crassly invited her in, there was an infinitesimally small moment where she considered saying yes, a nanosecond of contemplation brought on by certain urgings. But as she drove away, the thought of it turned pretty quickly into revulsion. 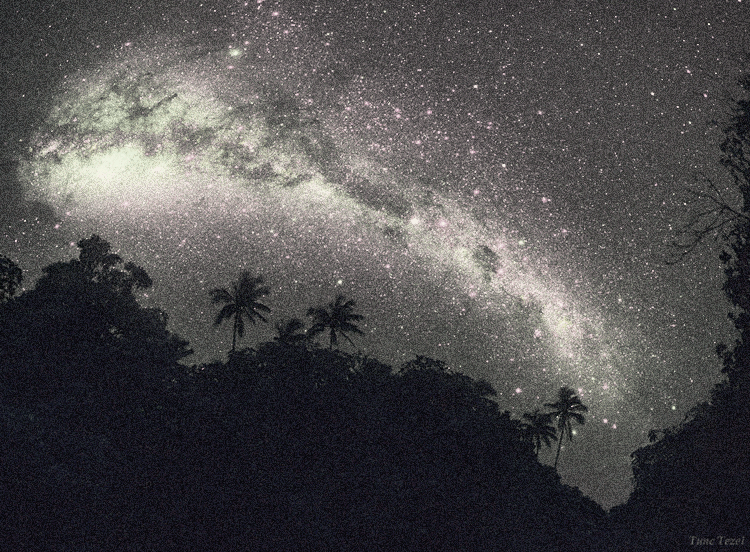 She fell asleep in a similar fashion: supine, her eyes closed to the busyness under the eaves of the roof which had so captivated Matthew.

It was well past Puna midnight and he was gone. As he got up to leave she asked him to lower the mosquito netting, which he did. He said good night and left her alone on the sleeping couch out on the lanai. He climbed into Yoda and drove away, the noise from the old truck like a cranky lullaby sending Pru off into sleep.

In the morning she was awakened by a magnificent sunrise. She gingerly leaned her legs over the edge of the sleeping couch, pushed aside the mosquito netting and stood up. The sun was a solid orange globe and there wasn’t a cloud in the sky: it was going to be hot. Very hot.

Prudence prepared a pot of ginger tea and let it cool to room temperature while she rinsed her face and changed into work clothes: an ancient pair of khaki pants and a tank top. Once dressed, she filled a big plastic cup halfway with ice then poured in the tea. On the way out the front door she grabbed a faded baseball cap from the coat rack and placed it on her head.

She walked across the crunchy lawn with iced tea in hand and stood at the top of the makeshift road. In Puna, a “highway” is a two-lane paved surface. A “road” is a path carved out of anywhere (through the jungle, across lava, along the edge of a pali, or cliff). A road generally has room for one car, and may or may not have room for two cars to pass in opposite directions. In other words, a road is a path of your own creation.

The makeshift road on Prudence’s property was two worn tire tracks that descended from the far side of the front yard down through some scrub brush and junk trees. Scattered along the downward slope are strawberry guava she can not get rid of. As the road emerges from the scrub overhang, it passes through a deep field of cane grass. Twelve feet tall or more in places, the grass grows avidly and unabatedly down at the bottom of the property.

Further along, where the end of the road fades into the lawn in front of Manu’s cottage, she’s managed to keep the towering cane grass under control. Its tall weeping fronds lean and bend constantly toward the grass beneath the shower trees, so she’s forever cutting it back with her tractor. Before the seed stalks bloom like soft prickly wheat, she sprays them to try and keep them at bay.

Life in Puna is exactly this sort of daily cohabitation and doing battle with nature. Nature wins in the end, of course, but in the meantime, while there’s blood flowing through veins and the stubborn will of persistence in one’s gut, the difficult dalliance plays out across the district in numerous and unending ways. 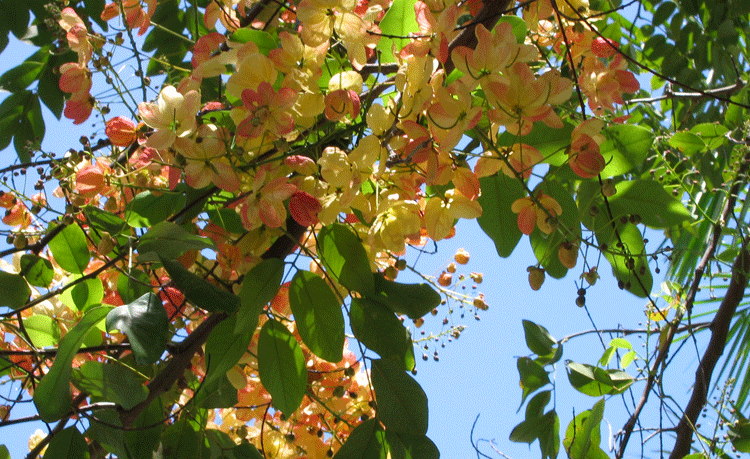 Prudence sipped her tea. She stood amid the shower trees, their scraggly pink and yellow clusters coming into fruition. She loved this time of year. Color. Heat. The sweet scintillating scent of tiny pikake flowers at night and the occasional surprise of ylang-ylang wafting through the air.

It was getting hot, just as the sunrise had predicted. It was also time to do something with Manu’s cottage.

The cottage had been cleaned out since before the luau, and it was tidied up again after everyone left. It struck her now as empty, though. He had lived on her property for almost seven years, a coexistence founded from within that grateful space between chance and the benevolent intervention of gods and ancestors. This had been and always would be, to some extent, Manu’s cottage, but it was time to move on. Time to allow someone new to absorb the mana of the place, to be its inheritor and honorable guardian.