Kam the Pig Hunter, aka Kam the Road Master, broke for lunch around one. The sun had reached its highest and hottest point in the day, and even though he was protected by an overhang above his seat (or perhaps because of it), the jungle heat was condensing and intensifying around him.

He turned off the bulldozer and climbed down from his perch. By his estimation he had cleared halfway to Ohalani Road.

Brushing cinder, dust and leaves from his long hair and beard, he walked along the rutted path toward Manu’s cottage. Scattered about were lava rocks the size of soccer balls or bigger. The sides of the new road were lined high with jungle debris: scrub brush, small junk trees, strawberry guava and mounds of charcoal-colored cinder soil.

He emerged from the jungle and went to his truck, stopping to check his cell phone for messages. When done he unhitched the flatbed trailer from the truck and let its bulbous nose fall to the ground. He climbed into the tall heights of the truck and drove across the coconut lawn and then up the makeshift road.

“Prudence Overmeyer!” he called, idling his truck near the house.

She came out onto the lanai. “Hey Kam, how’s it going?”

“So far, so good. I’m about halfway. I should be able to hit the main road by end of day.”

“I’m heading to Four Corners to see Mimi. You want anything?”

“No no, thank you.” Truth is, she couldn’t wait to go down and view progress on the new road. 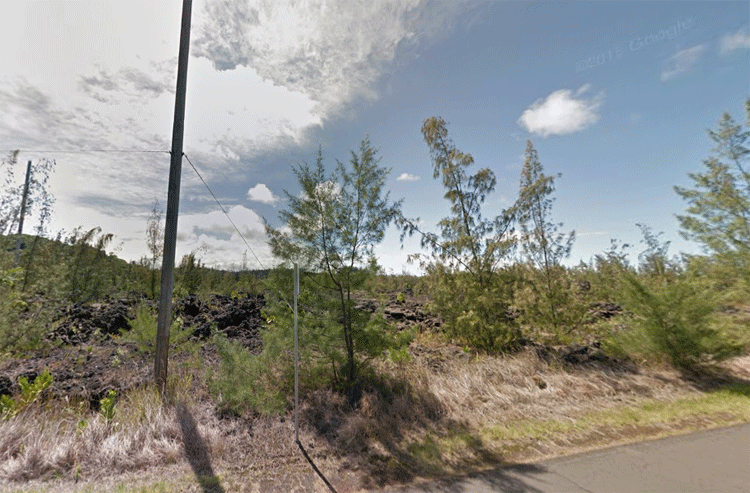 Up at the Four Corners General Store, there are four tables that sit quietly like gentle observers on the covered lanai out front. Kam’s girlfriend, Mimi, the diminutive yoga instructor from Kukio Kai, was seated at the last table, looking toward the entry of the small general store and cafe. Across from her sat the Rinpoche. As he recounted the story of how he had saved a captain of industry from “the all-consuming forces of greed and corporatism”, his eyes peered past her and focused on the jagged, greyish landscape across the road.

In 1960 there was a volcanic eruption that lasted four weeks in this easternmost point of the Big Island. It began in mid-January when a series of hundreds of small earthquakes shook the agrarian community. Suddenly deep cracks opened in the ground and then a fissure, half a mile long, tore open and began spewing fountains of lava. A fast moving lava flow ensued, pushing quickly across the landscape toward the ocean.

At the time, the building that would become the Four Corners General Store was a farm supply shop called Takoda’s Feed & Farm. Located just a minute or two from the center of Kapoho town, it sat alone at the southwest side of Four Corners and was owned by a widower named Takoda-san.

When the earthquakes started breaking apart the ground, the authorities required Takoda-san, along with others in the vicinity, to evacuate. With the help of some neighbors he loaded as much inventory as he could onto his truck, making several trips back and forth, unloading the goods beneath the carport of his nearby house. He pushed the evacuation orders to their limit, making his last trip out just as the civil guard blocked off the roads.

Unable to go near his store, he stayed at home in his small one-bedroom house tucked behind the Red Road, just past the barren moonscape created by a lava flow five years earlier.

By day he would stand atop a ladder that he’d leaned against the side of the house and watch, from the perimeter of the 1955 flow, as steam and methane explosions breached the skyline of palms trees and o’hia from the new flow. Thunderous maelstroms of fire and steam sent clouds of grey pumice spewing across the neighboring papaya, coffee and coconut farms. As the trades started blowing all of that south, in his direction, he taped finely meshed screens across the windows to keep the cinder out.

At night, he would watch the sky glow in a terrifying orangeish-yellow wall of light as the lava spread north and east, igniting everything in its path. Sitting on the lanai, he rocked slowly in his chair and wished his wife were still with him. 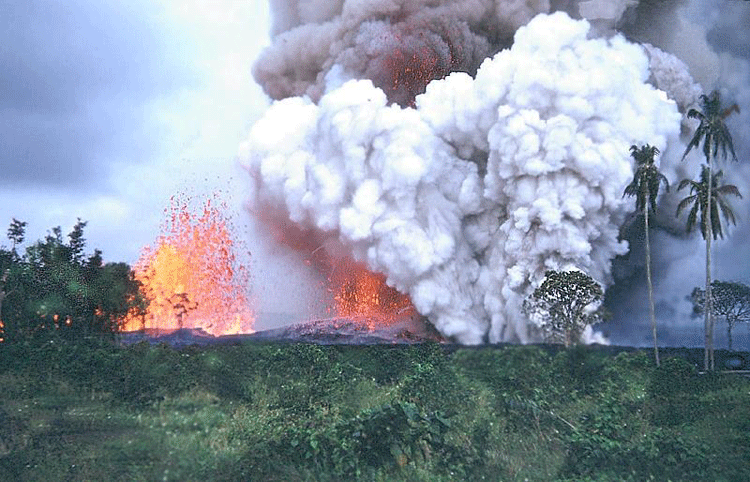 During the eruption, great earthen berms had been built by men and their dozers to try and keep the lava from flowing south into Kapoho town. One of those berm builders was Kam the Pig Killer’s father, who, along with other local men, dredged mounds of soil and rock from the ground and with it formed barriers that were 25 feet high and 30 feet wide.

Eventually the berms were breeched and lava flowed forcefully in the direction of the lighthouse and town. By the time the eruption stopped in mid-February, lava had consumed the small village of Koa’e, to the north, and buried the entire town of Kapoho, which sat due south of the fissure. Moreover, 500 acres of new land had been added where the lava poured into the ocean. 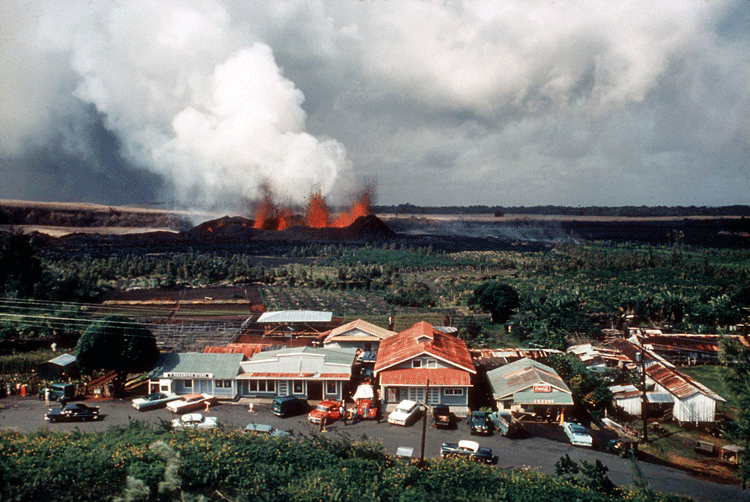 Original photographer not known, but I found the image here http://www.plan59.com

Miraculously, the lava stopped a mere forty feet from Takoda’s Feed & Farm. The flow surrounded the store on two sides, coming to rest at the edge of what is now the parking lot.

For months the trade winds blew a constant charring stench down Red Road, filling every corner of Takoda-san’s house with the smell of smoldering campfires.  All throughout the day, he could see the steam rising from the solidifying lava field up the road, as well.

What to do? he asked himself repeatedly. What to do?

He wished he still had his wife to give him guidance. She had been the smart one – the bookkeeper, the manager of details; he was just the decent old guy behind the counter. They moved to the Kapoho area soon after the 1955 eruption and set up shop, figuring lightning (or in this case, Madame Pele) wouldn’t strike twice.

In the midst of those five years between the lava flows, his wife had died suddenly. She’d been picking anthuriums in the yard to bring into the house when she felt a dull pain in her chest. She dropped to her knees and leaned forward, letting the anthuriums fall to the ground as she pressed her hands against her chest. Unable to call for help – Takoda-san was at the feed store and there were few houses nearby – Setsu closed her eyes and gasped, unable to catch her breath.

Takoda-san had managed to maintain the store in Setsu’s absence but now, he was feeling, this was too much. Not counting the properties along the tide pools at the ocean’s edge, Takoda’s storefront stood alone, isolated, surrounded by lava on the north and east, and bounded on the west and south by verdant Green Lake Mountain, a scrub jungle, and the 1955 flow.

A few weeks after it had stopped flowing, the lava was still steaming. The constant flow of acidic gas was dangerous to be near, especially for a man in his 60’s who had suffered first the lost of his wife who had supported him throughout life and now the loss of the village that supported his livelihood. Nevertheless, one day soon after, Takoda drove up the Red Road to where the barricades were. He pulled his truck off to the side and walked along the mauka side of the road.

He hadn’t been to the store since the evacuation. Since then, during those moments in between sleep and wakefulness, when the mind plays its tricks, he’d had visions of a charred ruin, or layers of cinder and ash as high as your knees. He didn’t know what to expect, although he’d been assured by the authorities that the store had survived the flow. Still, anxiety gripped him as he strode through a large field, past the grand monkeypods at the base of Green Lake Mountain, and approached the store from the back side of the property.

He was relieved to find that things were not so terrible at the store – dirty, yes, covered in the ancient soot of the planet, and disheartening – but his meager life’s endeavor was still intact. 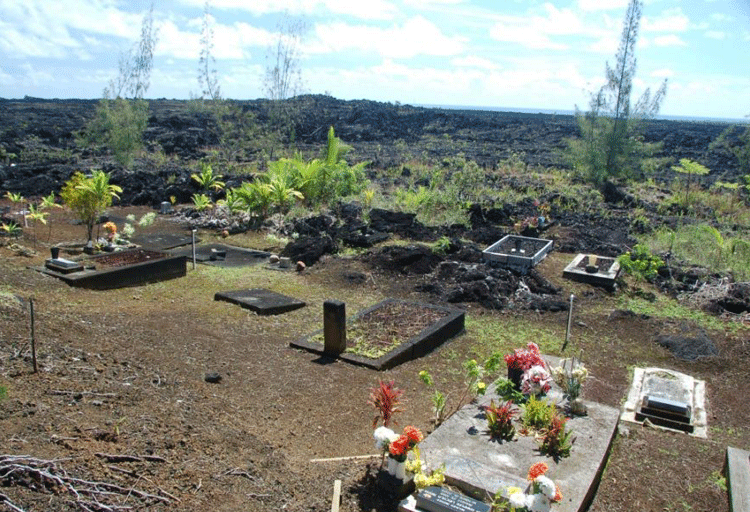 Worried that much of his customer base had now been displaced, Takoda-san went to the cemetery to consult his wife’s spirit. He lay a spray of small white orchids and a single purple anthurium on the grass in front of her tombstone and then knelt down. He bowed and quietly recounted to Setsu the terrible eruption – the magnificent fountains of lava, the now-endless smell of burning foliage, and its aftermath: the overall sense of loss and isolation.

He wiped away tears. “Beloved wife, I am sorry to lay my burden at your feet. I don't know what else to do.”

Of course, Takoda-san knew exactly what he was going to do. He had labored long and frequently over the issue of what was next as the lava flowed those four long weeks.

With no return to normalcy in the foreseeable future, he had decided to sell his store and move to the relative safety of Hilo town, 40 minutes to the west. He had gone to the cemetery not for answers but to inform his wife what he was doing. He would be further from her grave, and would probably visit less frequently as a result, for which he apologized. And although he would probably sell the house as well, if he could find a buyer, he wanted Setsu to know that he would always keep her apprised of where he was so that she would always be able to find him.