In old Hawaii, pre-conquest, pre-Captain Cook, before the missionaries and the businessmen and the government interlopers and hard-core capitalists all arrived – in the days of the great Kamehameha I, land was never owned. It was held by the Alii Nui, each of whom ruled a different island.  They didn’t own it personally, however; once an alii lost power, they lost all rights to the land.

The Alii Nui divided their islands into large districts called “moku”, which were in turn governed by lesser rulers. The moku were divided into many narrow strips of land called “ahupuaa” for commoners to live on. The ahupuaa stretched from the mountain down to the sea.* 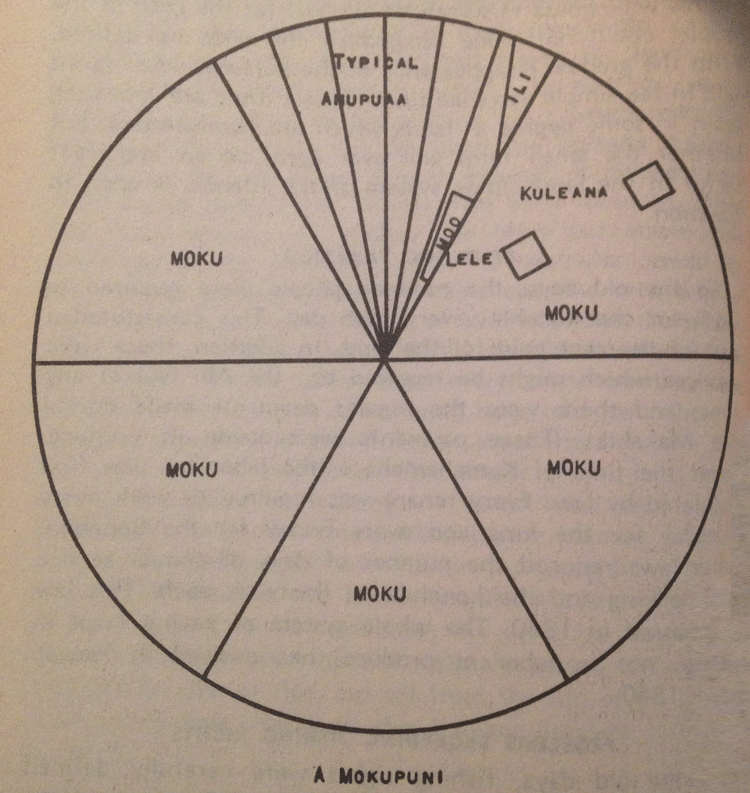 *For a very good treatise on the rule of land before and after the Great Mahele, see chapter 7 of  the book “Ancient Hawaiian Civilization” (A series of lectures delivered at The Kamehameha Schools, Mutual Publishing ©1999 http://www.amazon.com/Ancient-Hawaiian-Civilization-Kenneth-Emory/dp/1566472806)

The benefit of these ahupuaa were that the people who’d been granted rights to live on them had the ability to gather timber and other materials from the uplands while raising kalo along the down flowing streams, growing crops in the warmer, lower regions, and gathering fish from the ocean. For generations, people were accustomed to working the length of the ahupuaa, literally from mountain to sea.

When the haoles came and disrupted everything, as they are prone to do, they convinced Kamehameha III that it would be best to divide up the land and allow Hawaiians to own small patches of it, instead of being allowed to roam free within the long boundaries of their ahupuaa.

“In no time,” Hal told Kenny, as they sat quietly in the back room of the bank, “the industrial farmers had taken over all the farming land. The bulk of the kuleana, which were small farms granted in the time of Kamehameha, were gone. Nobody knew what the borders were anymore, nobody could recognize the boundaries because the land was overrun with huge farms. Of the million acres set aside for commoners, only about 28,000 were actually claimed. There was no surveying in the old days – a border, in fact, could have been a stream, or the trajectory that a rock takes when you roll it down the hill – I’m serious.  How can you expect people who are used to working the land from mauka to makai get used to this notion of, Here’s your two land-locked acres; have at it?”

“I mean,” said Hal, “I’m not blaming Peter Pualoa for what happened to him: this Kyle Weatherly and his Alternative Energy Corp smell to me like crooks. I’m worried because, you know for sure, if he got taken, others did too.”

“I’m surprised nobody else has come forward.”

“Give it time, I’m afraid.  You know, what pisses me off is, we come in and irrevocably alter their society, imposing our rules and ways of doing things…And then some jackass comes along generations later and tries to do it all over again.” 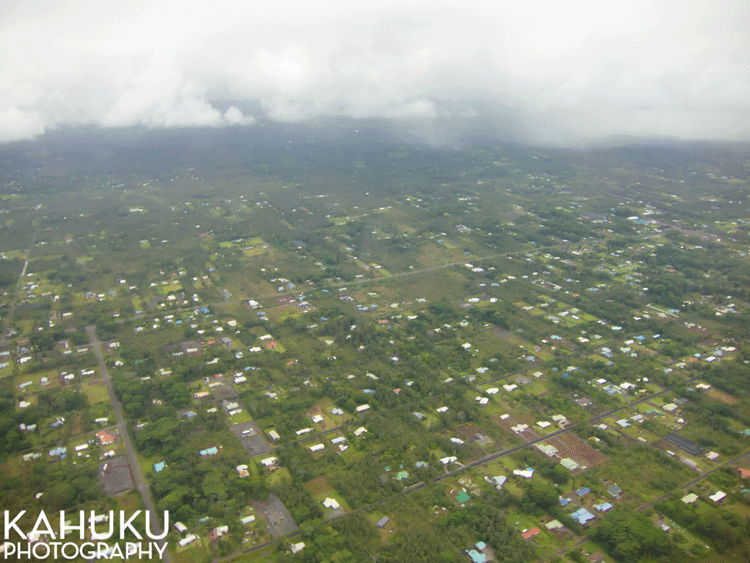 “This ok?” Mimi asked. She pulled into the handicapped parking spot in front of the post office, a one-story rock-hewn building with a low-slung roof.

The Rinpoche looked straight ahead through the windshield and then flipped through the papers in his shoulder bag: more signed leases for geothermal exploration. “Yes yes, fine,” he said. “First I’ll go inside and mail these then I’ll run to the natural grocery for a few things. After that, a few knick-knacks for the house. Pualani likes the jasmine scented candles at the gift shop, and I’m running low on incense.” He looked at her. “Did you know that smudging, which is the use of smoke, say from incense or burning sage, has been used in purification rituals for nearly six thousand years?”

She shook her head no.

“It’s true. After errands maybe I’ll have a cup of tea before heading home.”

“In that case, I’m going to run to the drugstore then I’ve got to get back to Kukio Kai.”

“Don’t worry about it. I can—” he checked his watch, “—the Hele-on should be coming around in due time. If I miss it for some reason, I’m sure there are plenty of people who would be willing to give me a lift.”

He winked at her and then extracted himself from her car. 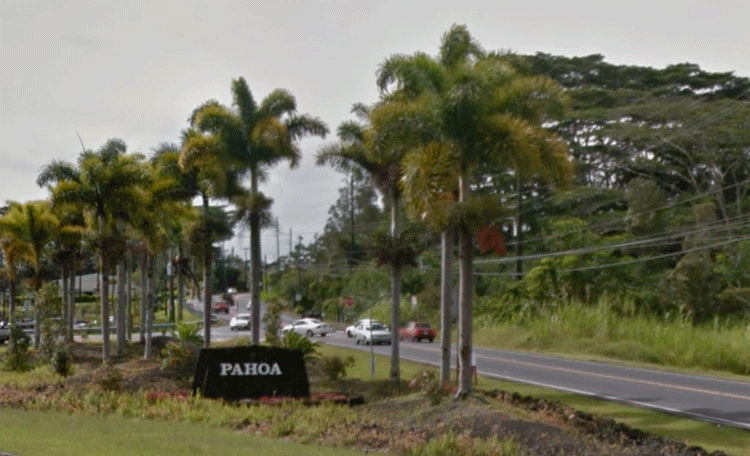 The line at the post office was unsurprisingly long and moved with indicative slowness. It stretched out of the cramped, flourescent-lit room where the service counter was, out into the L-shaped lobby. The long arm of the building’s L was flanked by post office boxes whose unadorned metal faces had tiny windows so you could tell if you had any mail. Here, the shadow dodgers from the flanks of the volcano came to pick up their subscriptions to Guns & Ammo, Secessionist Views, and private newsletters that purported to document the slow slide of the United States into socialist ruin.

The simple people who lived on rural roads without mail service – hapa kama’aina, vanilla haoles, assimilated hippies, some Hawaiians and members of the gay tribe – all received their mail here as well. So too the hobo hippies, who left a trail of stink in the dim hallway as they came to retrieve their monthly food stamps and government assistance checks. The trustafarians, young white pseudo-hippies with bare feet, beads and dreadlocks, received their regular allowance here, the signature on their checks scrawled by some distant parent or financial manager with a mixture of disdain and disappointment.

In addition to being a social microcosm of Puna, in the early 1970s the Pahoa village Post Office was the busiest marijuana distribution center in America. (Allegedly.) These days it was just a place to send and receive your mail. Bare feet. Slippers. Tattoos. Body odor. Pidgin. Toothless chatter. Too many mailing options and not enough supplies. An endless blur of yellow slips being exchanged over the counter for packages.

People were generally polite in the post office. But every now and then you had a truly crazy one who complained about how slow things were moving to his imaginary friend(s) of whichever unlucky soul was standing next to him. Or the poor thing who burnt out an array of brain synapses back in the 60’s and now couldn’t figure out where to addess an envelope.

If you were standing in line, your role at some point included sharing the task of keeping the glass door propped open as the line inched forward, one customer at a time. Every now and then a sudden hush would fall over the line.  Amid the silence, somebody would open their mouth, usually to remark how quiet it was, and that would set others talking, and suddenly the cramped room is abuzz again with gossip, complaints and conspiracy stories.

Invariably someone would approach the main entrance and upon seeing the line their eyes would widen and their face sag in disappointment. Their lips would say Fuck dat and they’d turn around and walk away.

There’s much to be said for consistency. 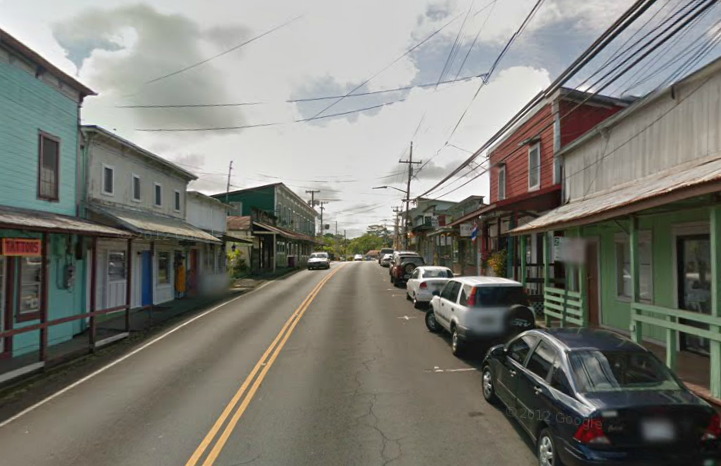 One by one, the Rinpoche took care of his in-town tasks, zig-zagging across the Village Road from one end to the other. After mailing his latest batch of contracts to Honolulu, he walked to the natural foods store, where he picked up a few provisions and carried them out in his shoulder bag. Next door was the gift shop, where he picked up the scented candles that his girlfriend and unwitting co-conspirator liked.

Next, he walked across the street to the bank. He climbed the few steps of the covered lanai and approached the automatic teller machine. As he tapped on the keys, the front door of the bank opened. Kenny the manager came out, followed Corinne and the other bank teller who were chatting away between themselves. Kenny had no idea who he was – the Rinpoche looked to him like many of the Punatics who wandered up from Kukio Kai, although this one was well-groomed and fastidious by contrast. Kenny nodded and said aloha as he locked the branch. The two women, still chatting, walked to their cars.

He crossed back across the street and made a stop at the organic food co-op, next to the pizza parlor and across the street from Luquin's, the Mexican Restaurant. Peter Pualoa was sitting at Luquin's bar. Next to him was Fishbone, Pastor Grace's husband. They bemoaned the evil nature of this interloper in robes and were devising ways to bring him to justice. They decided they would find out where he was staying and confront him, along with anybody else they could identify who’d fallen victim to his scheme. With their backs to the window, neither of them saw the Rinpoche as he exited the co-op with his jar of precious local honey and passed along the covered walkway across the street.

The last stop on his foray into town was the tatto parlor and trinket shop on the southernmost end of the street. There the Rinpoche picked up a trinket for Pualani: a beaded necklace of amethyst, tourmaline and blue beryl crystals. He called her from the store as he was making his purchase. “Are you at my house?” he asked as soon as she answered.

“Almost. I finished work for today and driving up Kapoho Road now. Are you still out?”

“No no, don’t trouble yourself.”

“It’s no trouble, Kyle. I’ll be there in ten minutes.”

He smiled, hung up, and paid for his purchase. He went out front and stopped on the covered wooden walkway. He perused his mental to-do list, wiped sweat from his face, and then nodded with the completion of his chores. He crossed the street yet again and went into Ning’s, the Thai restaurant. He walked up to the kitchen window and ordered an iced green tea to go. Pleased with himself, he sat down in front of one of the windows that opened out onto the sidewalk and watched as the town went about its slow business.