“Sometimes things are just fucked up,” Willow said to her new acquaintance. She’d been sitting at a table in the dining hall at Kukui Kai eating steamed tofu and toast while nursing her baby. Across the room she had been watching a girl not much older than her sitting at a corner table endlessly stirring a cup of tea. She’d obviously been crying: she had a ring of red around her eyes like a red panda raccoon, although the effect was not as cute. Her aura was grey-toned and sullen. Willow gathered that in lieu of drinking her tea she’d been drinking in a steady dose of self-criticism, so she unlatched the baby from her nipple and walked over to the girl, introduced herself, and asked if she wanted to talk.

At first Pualani shook her head, straining a smile as if to say no. She distracted herself by paying attention to the gentle infant resting in the fabric slung across the girl’s chest. She asked how old he was (“Six months”); how long they were staying at Kukui Kai (“Not sure”); where were they from (“Indiana”). She cautiously touched the baby’s cheek with a finger, causing him to stir.

“He’s fine.” The baby wriggled then closed his eyes again and drifted toward sleep. “You know, I don’t know anyone here,” Willow looked around the room. “You can tell me anything.”

Pualani shrugged and said, “Thank you. I don’t normally—.” Then she recalled what Kyle had taught her about asserting herself, about being honest with her feelings, and she started talking. She laid out her story, although in the most general of terms: there was this guy, older, passing through although I thought he’d be here much longer, thought he cared for me as much as I did for him… It was all very typical and afflicting—yet another of those lessons in life you can not teach to someone; they can only learn it through experience. She sighed and cried lightly, sat quietly at one point mired in her feelings. Eventually she confessed: “I feel like a fool.”

“Well, there then,” said Willow. She put her hand on Pualani’s. “Now it’s done. Time to move on.” 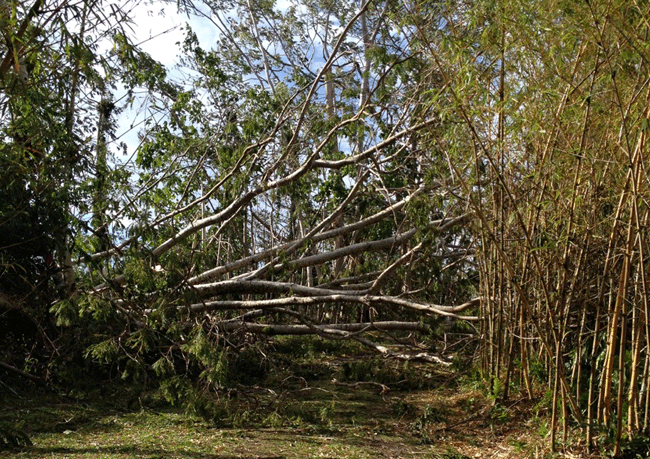 Prudence wasn’t sure which was worse: the sound of the trees falling or the endless whirr and groaning of the chainsaw required to get rid of them. She wore a heavy set of earphones and clear goggles as she lugged chopped up branches into the jungle and rolled sliced rounds of trunks into the ditch lining the driveway. Matthew was using the chainsaw; they’d started with the first of the trees closest to the house, the one that grazed the backsides of the rainbow eucalyptus on its way down.

“The first one is always the worst,” Matthew said as they took a break. The trunk of the large albizia still covered the driveway. He had chopped up what he could. However, they were going to have to wait for somebody with an industrial strength chainsaw to cut all the way through that trunk.

Prudence looked disappointed. “I kind of wished we’d started with the smaller ones, so it would seem like we made some progress.” 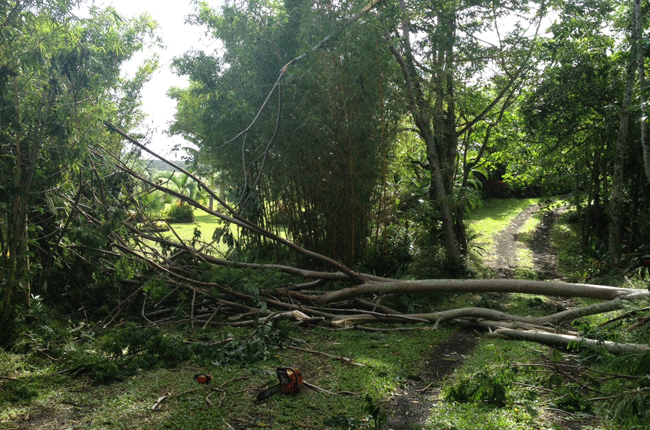 “What brings you to Puna?” asked Pualani. She was walking across the broad lawn with Willow and her baby toward the communal lodging.

“Well, if you need anything while you’re here, let me know. I’m not just here to spill out my guts. I actually have a job to do.” She cupped her hands. "And by the way, thank you."

“Thank you, Pualani. I will. I appreciate that. And you can talk to me anytime. Don’t be shy.” 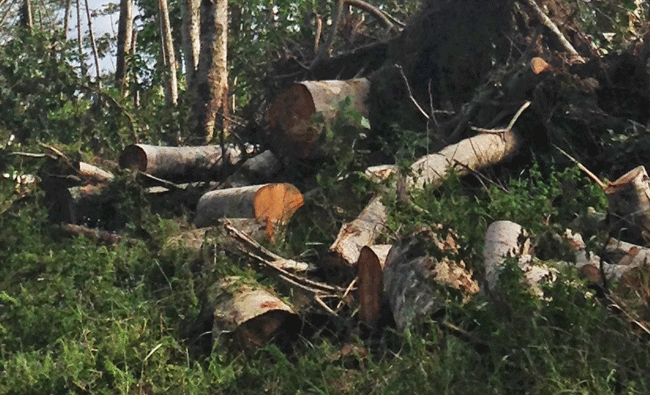 Prudence felt a rumbling. Even though she had headphones on she heard a groaning sound, something mechanical. Matthew lorded over a fallen tree whose trunk was narrow, only about as wide as his waist. He had one foot on top to steady it and the chainsaw was poised in the air. He brought the spinning blade down and let the vibrating chain drill its way through the wood. The chainsaw slipped out through the other end and part of the trunk bobbed up in the air.

Prudence approached and waved at him to cut the motor.

She pointed toward the side of the house. Kam’s mighty pickup truck was coming through the clearing, towing the big yellow dozer behind. She gave two enthusiastic thumbs-up then stepped over the tree trunks and walked down to greet him.

Kam leaned out the driver’s side window, which seemed to Pru to be two stories high: “I heard you had a mess to clean up.”

Lau Lau was in the passenger seat of the truck and he peered over. “Hey, Pru.”

The two men got out of the truck and joined Prudence on the lawn. They walked through the rainbow eucalyptus trees and onto the drive.

“Wow, crazy,” was all Kam could say as they surveyed the road.

“By the way,” he mentioned, “I don’t know if you know, but somebody hit one of the boulders at the end of the road I just built.”

“I—,” Prudence hesitated. She looked at Lau Lau, who was busy observing the road through the jungle. Then she looked back at Kam. “Really?”

“Yeah. Knocked it out of place.”

“Looks like they drove into the property, too. Drove through the jungle around where the D8 was parked.”

Prudence shook her head. “I don’t know what to say. I was pretty out of it last night.”

Lau Lau approached the two of them. “Why don’t you get the dozer, brother. Was a good idea. Lucky it’s here.”

“Yep. Much faster than a chainsaw.”

“Don't worry, I’ll just shove it all back into the jungle.” 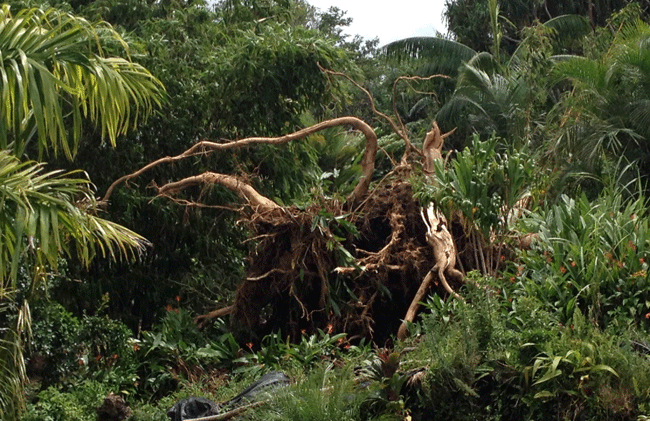 Kam went back to the truck to get the dozer off the trailer. As he did, Lau Lau led Prudence in the opposite direction.

Lau Lau nodded. “There’s paint all over that rock down below.”

“Nobody could have done that, hitting from the outside.”

“Means somebody came from inside and ran into the rock from there.” He looked around. “Whoever must have come from up here.”

“Lau Lau, I was so high last night, I wouldn’t have noticed.”

He rested his hand on her upper back, between her shoulder blades. “That's why you called me.”

“I told you I don’t remember if I locked the gate or not because I was in a hurry. Truth is, I fake locked it when I left.”

“Well. After Peter Pualoa and his buddies come by here, I knew the Rinpoche was in trouble. He’s a bad fucker but he doesn’t deserve what those boys had in mind. Anyway, I knew he’d come. I knew you’d let him stay til it was safe.”

“That tree—,” she pointed to the trunk too large for her chainsaw, “fell right after he showed up. I didn’t have a choice.”

“Stop that.” She grabbed his wrist. “Do you think Kam knows?”

“No, he don’t know. I’m the one who got down and saw the paint on the rock. He can’t see from all the way up there in that truck of his.”

“Well, we both did something stupid, you and me.”

“If anybody finds out, we’ll be harassed endlessly.”

“Nobody’s gonna find out. Besides, sometimes you gotta do what makes no sense on the outside but feels right on the inside.”

“I suppose.” In the yard, the bulldozer started up with a choking groan of black smoke. “You’re a good man, Lau Lau.” 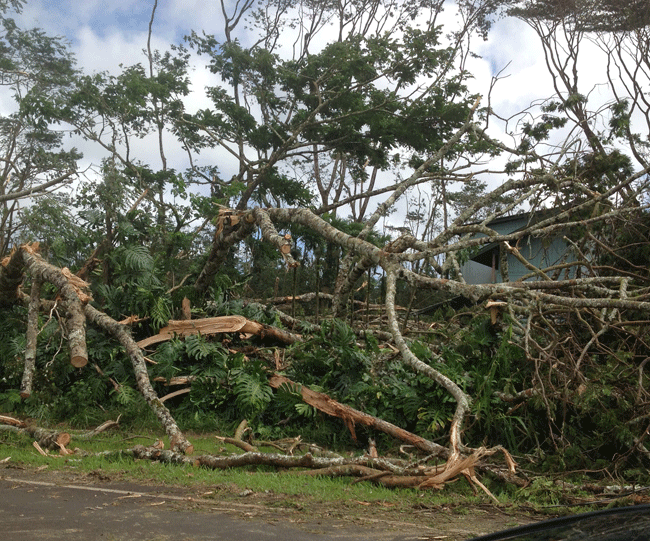 Peter Pualoa was at the house of Pastor Grace and Fishbone holding ice against the bruises on his arms.

“I can’t believe you didn’t put anything on those last night,” said Grace.

“Didn’t think they’d be black and blue like this. They hurt like a son of a bitch, too.”

“That Lau Lau has a mighty grip,” said Fishbone. “Too bad he couldn’t have got his hands around the neck of that scamming preacher.”

“Tell me about it. All that work and we don’t even catch the son of a bitch.”

“How do you know he’s gone?” insisted Grace.

“Cuz I have a feeling is all. Maybe he’s hiding in the woods somewhere. Or lying squashed beneath a big albizia. I don’t know. Probably drove out after we took down the road block.”

“I don’t know, auntie. Like I said, it’s a feeling. Maybe he’ll show up again, maybe not. All I can do is ask people to keep an eye out in case he’s around. Son of a bitch needs some justice.”

“Not like me to recommend such a thing,” suggested Fishbone, “but if he’s defrauded people for real, then go talk to the Mayor, tell him to open up an investigation.”

Fishbone slid a toothpick between his teeth. “And out of Lau Lau’s way.”