Early in the morning, young Pualani left the Rinpoche’s house through the screened-in lanai door. She wore a grin of simple gladness across her face.

She was in a good mood. She and Kyle had a nice quiet evening after dinner. There was no making love or having sex, merely modest affection: a brief resting on the sofa after Thai food, followed by a rinsing off in the outdoor shower before bed (“to preserve the sanctity of the bed place”, as Kyle would say) and a kiss on the lips goodnight.

She spent many nights with him but not all of them. There were nights when he needed to work or study or meditate, or whatever it was a guru did when he indicated he wanted to be alone. It suited her, because even though she’d grown very close to him in the short span of time he’d been on island, she didn’t want to get too attached. (Granted, it may have been too late for that. There was something alluring about being on the arm of a holy man who moved through town with a certain sway and confidence. Nevertheless, she allowed herself the fantasy that she could easily let him go.)

She steered her small, well-worn sedan onto Pahoa-Kapoho Road. She was pleased with herself. She recognized that the nature of her acquaintance with the Rinpoche consisted of giving herself to him in obeisance and affection, and in return she received life lessons from him: she obtained a broader path to walk along. After talking with him last night, she was less inclined to think of herself as merely a pleasant task masker who excelled at organization and press releases, but rather as a young woman who was bringing a benefit to so many people. She herself was not the expert but was an organizer of experts: the teachers, the workshop leaders, kupuna. And by bringing these people to the masses, limited in number though they may be, she played an important role in the betterment of other people’s lives.

“We can’t all be leaders,” Kyle had told her. “But each of us has a role to fulfill. We simply have to discover it. And when it arrives, it is our obligation, as well as our choice, to embrace it. If not, then you have to wholeheartedly let it go and accept the consequences of your decision.”

Kyle was right. He was smart. And his influence on her was strong. Pualani acknowledged this, and she also sensed that the Rinpoche was getting ready to move on. That intuition is what had triggered her what’s next question. And although he avoided answering her, the sum of her days and nights with him broadened her smile as she drove along Kapoho Road in the direction of the moving sun. 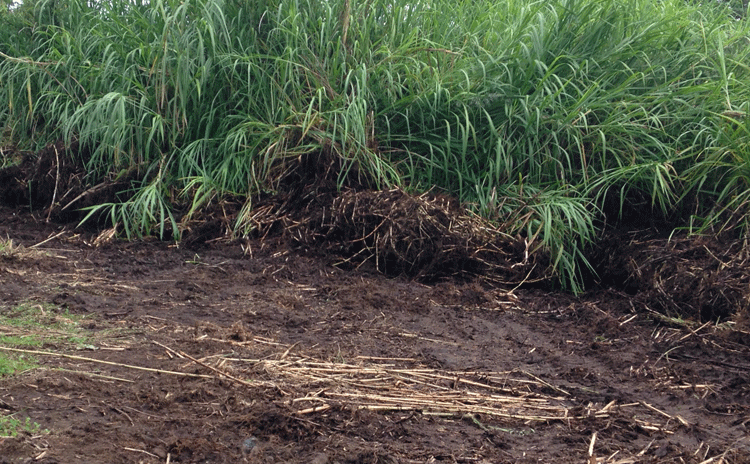 After a breakfast of cooked grains with fruit and tea, Prudence walked the length of the new cottage driveway, from the perimeter of the coconut lawn where the drive began down to where it met the road. The rutted jungle path was strewn with wooden debris and rocks the size of basketballs or bigger, and it was plenty wide enough for a decent sized pickup to pass through. It at first ran parallel with the lawn, which was visible through a thicket of kukui and ferns, then it curved away, moving slightly downhill and away from the yard. After a three or four minute walk she found herself surrounded by jungle in a place that was peaceably isolated and lone, save the sleeping behemoth that was Kam’s D8, which occupied the width of the road. Prudence walked through some brush to get past the dozer and continued on. The rocky drive curved to the right, then slightly left, and then straightened out for the final twenty yards or so to Ohalani road.

When she returned from walking the new road, she crossed the coconut lawn behind the cottage and saw Mathew Lawless sitting on the wide steps along the back lanai.

“There you are,” she said to him as she got close.

All last evening, as Prudence sat in bed reading and sipping her tea, she kept checking her phone to see if Matthew had messaged her back. He hadn’t. And wouldn’t. His avoidance, like the vog, was making her a little bit crazy. “Did you get my messages?”

He shook his head. “It’s kind of a lot to digest. I never thought she’d show up here.”

“Do you want to talk about it?”

Prudence plucked a white gardenia blossom and cradled it in her hand. She brought it close to her nose and inhaled. Then she tucked it into her hair behind her ear. “But you will?”

They walked across the lawn then onto the makeshift road up to the house. Along the way, Matthew began the story of how he and Willow met, where they were from, where their similarities merged, where they diverged.

In the house he elaborated on the pregnancy, on leaving Willow not merely with her permission but with her encouragement. He spoke honestly, if reticently at times, about their relationship, and about the agreement they’d forged before he left. The terms were more hers than his, but he had accepted them.

Prudence listened closely; as Matthew spoke, she compared her pre-conceived notion of who this young man was with the words that she was hearing. Over tea and a few puffs of Puna Pride, she was once again reminded of how wide the gulf can be between reality and belief. 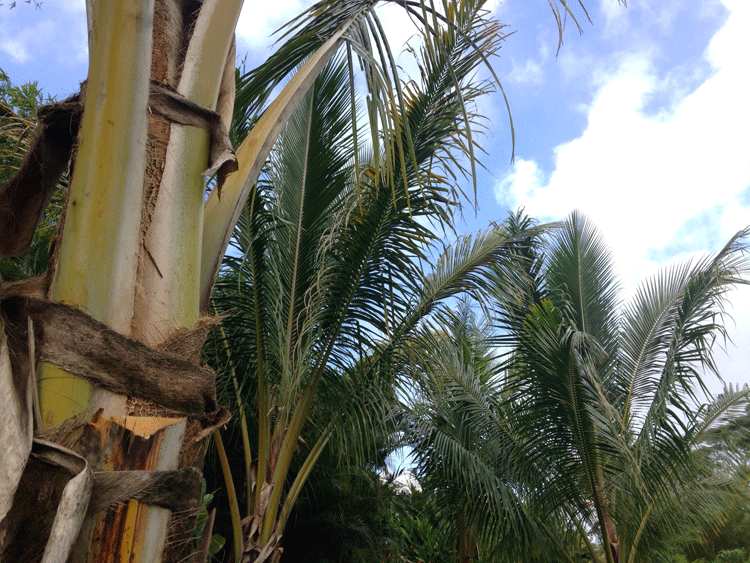 That same morning, not long after Pualani had left the Rinpoche’s rented house along Kapoho Road, a dark blue pickup truck drove by and slowed down as if to check it out. It went a little further down the road and made a u-turn. It passed by again, this time more slowly, and the Rinpoche, who was in the corner of the kitchen, happened to get a glimpse of it as it approached the driveway on the other side of the house.

To his surprise, the truck pulled into the drive and stopped. He didn’t know anyone with a blue truck and he certainly wasn’t expecting company. He went into the bathroom and stood in the tub, peering out the window, trying to see who was there. Two men got out of the truck, one of whom he recognized as Fishbone. The other one looked familiar but he couldn’t put a name to the face.

“He live here?” asked Peter Pualoa, as he and Fishbone approached the screened-in lanai.

“I don’t know,” said Fishbone. “All I know is he has a place somewhere along Kapoho Road. This one I know was vacant recently.”

Peter Pualoa peered in through the screen, straining to see into the living room. “There’s not much in there. Some stuff.”

“I don’t know.  Clothes and some books.”

“Let’s go ask Tita ‘Aina,” said Fishbone. “Have something to eat and find out where this mo’fo lives for sure.”

“Nah, we just go in. Doesn’t look like nobody’s here.”

“Nooo,” said Fishbone. “I don’t wanna go breaking into somebody’s house if we don’t know for sure who it is.”

Peter Pualoa stepped away from the door. “Fine. Suppose if I’m gonna kick somebody’s ass, I might as well have a good meal first.” 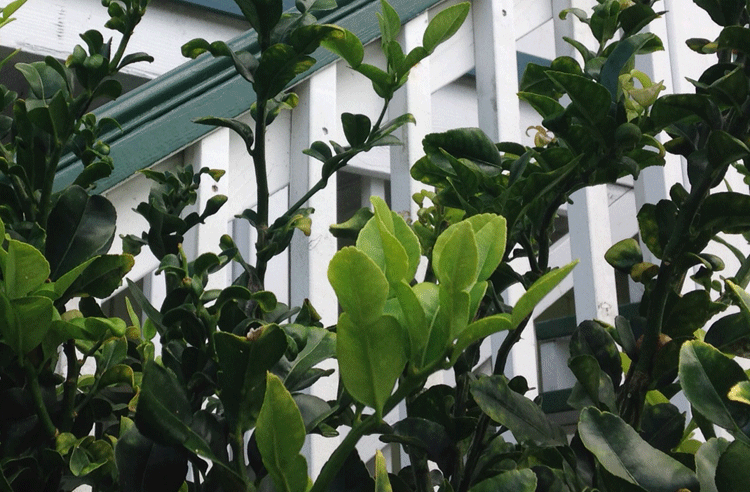 Cousin Violet appeared along Prudence's driveway. She passed through the rainbow eucalyptus just as Matthew and Pru came down the front stairs of the house.

“Am I interrupting?” Violet called as she crossed the yard.

“Good,” she said.  Her slender frame stopped as the three of them got closer. “Ah,” she said, looking at Matthew. “The boy with the white behind.”

“Keep me posted,” she said.

“Will do.” Matthew bowed his head at the delicate woman dressed in black: “Violet.” He climbed into Yoda and started up the engine. A rattling shook the undercarriage of the pickup truck and a grey puff of smoke shot out the tailpipe. He took off across the yard, his left arm hanging out the window. At the end of his arm was his fist, the pinky and thumb extended to resemble the shape of the Big Island.

“What brings you by?” Prudence asked.

Violet tilted her head back and smelled the air. “Kona windstorm,” she pronounced.

Violet wagged her index finger. “No, this is different. Strong winds are coming.”

“I see. So you came to discuss the weather?”

“Well...” said the old woman cautiously. “You know I don’t like to meddle. And I only interfere when it’s absolutely necessary.”

“I’m here about your friend the Rinpoche.”

She extracted a clove cigarette from her black dress. “Do you mind if I smoke?”

“Come up on the lanai. I don’t want you catching what’s left of the grass on fire.” 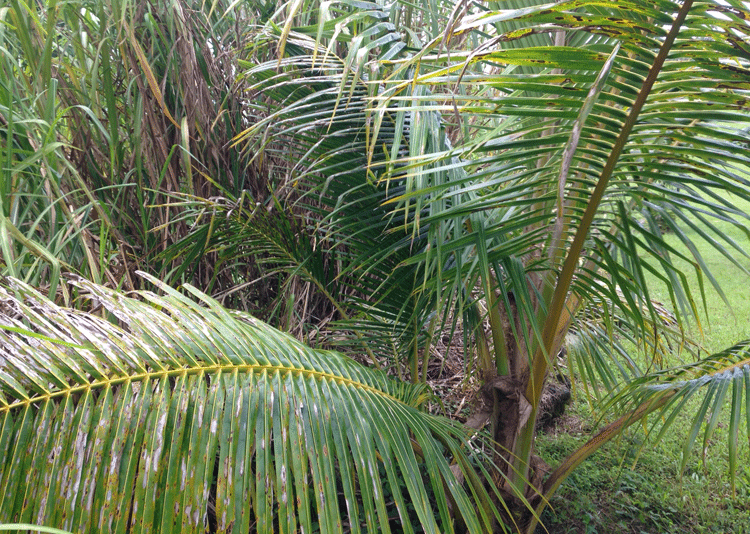 Kyle Weatherly, aka Rinpoche the Magnificent, called Pualani’s cell phone repeatedly until she finally answered. “Where have you been?” he demanded.

“I was in a staff meeting.”

“I can’t. I’m about to give a tour of the retreat facilities. I can get you after that.”

“Then call somebody and have them come pick me up. No, wait. Not just anybody. Not good—. Not good—. Call Prudence and tell her it’s an emergency.”

Urgently: “What is wrong, Kyle?”

“Never mind right now, I’ll tell you when I get there.”

Pualani looked up at the broad canopy of the monkey pod tree above her. Nearby was a group of representatives of a holisitic healing association from Denver, waiting patiently as she took the call. “I’ll come get you after—.” 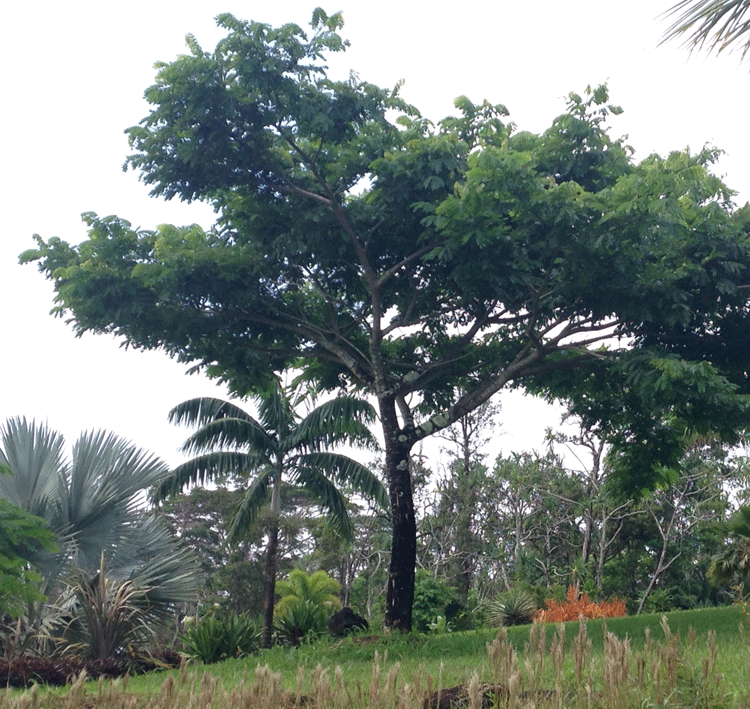 On Ohalani Road, Cousin Violet pinched the end of her cigarette and rolled its hot embers into the ashtray that was shaped like an elephant.

Prudence sat across from her dumbfounded at what she’d just heard. Not entirely surprised, necessarily, but dumbfounded. At the moment, she wished that she had the ability to disappear like Violet could — to be able to come and go in an instant, to willfully flee without all the messiness of goodbyes.

“His sham has been uncovered,” declared Violet.

“Like fire ants, the news will be carried on the wind.”

Prudence’s phone rang. She went into  the kitchen and answered it.

Clearly, neither of them was pleased to be having this particular phone call.  As Pualani gently pleaded Prudence became progressively more annoyed. Meanwhile, Violet sat outside patiently, catching a phrase here and there, exhaling smoke into the brittle air, and occasionally rolling her eyes. “Are you going to go get him?” she asked after Prudence came back onto the lanai.

“He wants a ride to Kukio Kai.”

“So Auntie Lulu can take a swing at him? That’s ballsy.”

“My advice would be to keep your distance.”

“Well, but I agreed to give him a ride to Kukio Kai.”

“By giving him a ride you’re complicit not in his crimes but in his escape.”

“And you’re possibly also saving his life. Angels blessed the Pualoa family, except that one, Peter, isn’t quite right. Much as I dislike what little I know of this Rinpoche fellow, I fear for him.”

Prudence grabbed her car keys and her sunglasses. “Let yourself out.”

“Of course.” A gust of wind came up from the south, not the typically lethargic, voggy Kona wind, but a fiercer gust, brusque and full of urgency. Violet grabbed the elephant ashtray to keep it from getting blown over as she called out to Pru:  “Get home early!”