The Rinpoche hurried out of the screened-in lanai and rushed towards Prudence’s car the moment she pulled into the drive. A few gusting winds blew through the papaya fields across the road and wove their wispy hands around the Rinpoche’s house. With his long pants and tunic top fluttering in the wind, he flung his suitcase in the back seat and then got into the passenger seat beside Pru.

She glanced at him as he fidgeted in the seat: “What have you done?”

“Nothing! There were men here earlier, looking for me. Looking to harm me.”

“Why would they want to hurt you?”

“Pualani said you wanted to go to Kukio Kai.”

“Well, realistically I should probably go directly to the airport, but it wouldn’t be right to leave without saying goodbye.”

“How righteous of you.”

“Yes. And my flight isn't until eight o'clock tonight.”

“Honolulu. And then the mainland. It’s time for me to move on.”

“Retribution isn’t the Hawaiian way, Kyle. Ho’oponopono, which means to make things correct, doesn’t typically involve killing the offender. When a person has wronged someone, the wrongs are addressed.” Prudence was feeling calm in the face of the Rinpoche’s clearly uncertain fate. She felt a certain sympathy for him, but as with most of her feelings about him this one was fleeting and came bundled in a dozen strings of doubt, like stink maile wending its way through the trees. “You’ve made yourself a mess,” she said.

“Yes, I have. But I was honestly trying to do some good.”

“By getting people to give away their land?”

“I didn’t realize it was fraudulent.”

“No.” On this she was adamant. “You're name is Kyle. Always has been, always will be. Besides, I wouldn’t be driving a getaway car for a real Rinpoche.” 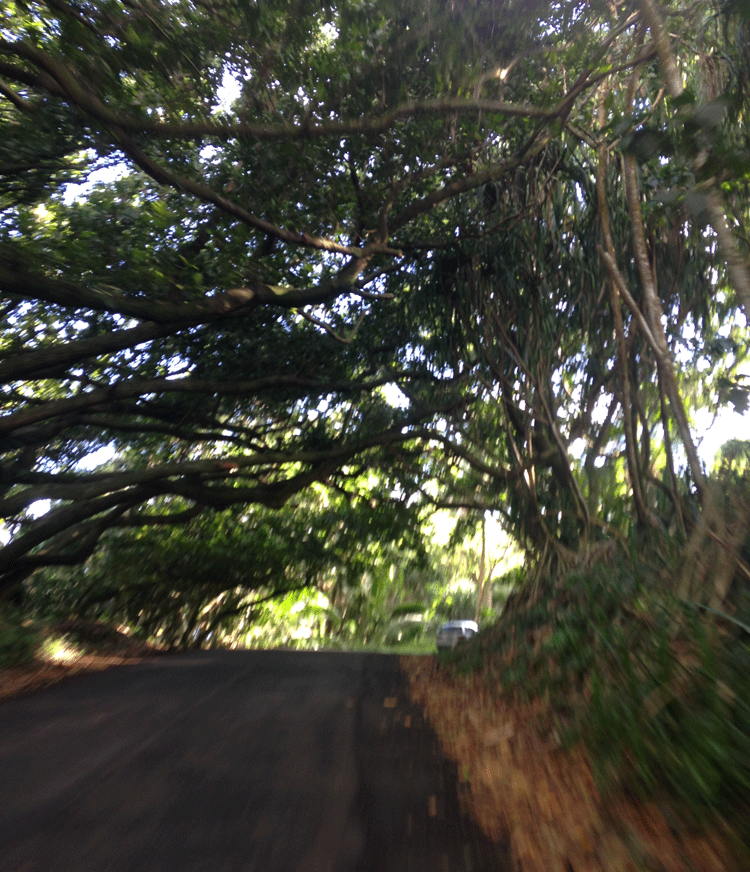 As they drove down Red Road, the car rose and fell dizzily as if along waves. Prudence told Kyle everything she knew, in other words everything Cousin Violet had shared with her that morning, which in turn had been given to her by Auntie Lulu. “It’s third hand, but I consider it to be from reliable sources.” According to the two aunties, a Council meeting was going to be taking place down at Uncle Billy’s kipuka to determine what the community response was going to be to the Rinpoche’s swindling of its landholders.

Trying to defend himself, Kyle told Pru that years back he had met an executive at a gas and oil company. The man, in his late 50s, came to him after losing almost everything in a series of bad deals and bad luck. “He desperately wanted to live a better life. He believed he lost everything because he’d been living an unjust life, scamming, swindling, stealing – you name it. He felt he was being punished, deservedly, and he wanted to figure out how to spend the latter part of his life living honorably.”

“Yes. As a spiritual guide. I was giving a series of talks at Esalen and we happened to be in the hot tub at the same time one evening. We talked about a lot of things, he and I. Over the course of three or four days we became well acquainted and met each evening in the hot tub to talk about our lives – what we were missing, what we needed, didn’t need…the gamut.”

And then, apparently, with the scent of California cedar toasting away in the bubbly starlit night, the two men devised a plan to buy and sell geothermal leasing rights on the Big Island. They convinced themselves that the transactions would be harmless and that Kyle (by now known as Rinpoche Samdup) could make a decent commission while the executive, depending on how he handled things, could end up either earning lucrative energy rights or being one of the largest landholders in lower Puna.

In the vicinity of Opihikao, Kyle leaned his head against the door frame. “Prudence, I feel sick.”

Prudence reduced the speed of the car and as they came into a clearing, the ocean whipped against the rocks off to the left. “I take it this isn’t the first time you’ve gotten yourself into something like this? Mexico perhaps?”

Kyle groaned. “I decline to answer on the grounds that I may incriminate myself.” 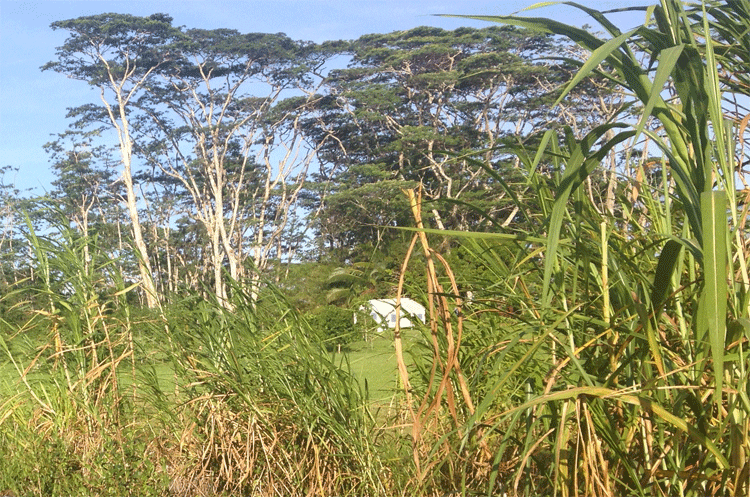 Pualani lived in shared housing down on the Kukio Kai property, in one of a cluster of two-bedroom huts, each with a shared bathroom. This staff housing was set back on the property, all the way mauka, where the clearing met up with the jungle along the low flanks of Kilauea. It was quiet there, especially when everyone was working around the grounds.

Prudence had driven Kyle through the length of the property up to Pualani’s hut. She stayed in the car as he got out with his suitcase and shoulder bag.

Pualani, suddenly sensing the isolation of the housing units, stood on the front stoop as Kyle came towards her. She was dressed in her work outfit: a pair of dress shorts, tennis shoes and a white tank top. In one of her hands she held a work journal with a ballpoint pen stuck in between the pages for today. With her free hand she  waved tepidly to Pru, who drove off swiftly.

“What aren’t you telling me?” she demanded of Kyle as he set his things down in the living space.  “I talked to Pru earlier and she said that people are angry with you because of the geothermal leases.”

“Yes. Yes. Apparently they are.”

“That’s why you didn’t want me to talk about geothermal, isn’t it?”

“I wanted you to know as little as possible; I didn’t want you to become a scapegoat in the event things went south.”

“So you knew it was a scam all along, and you took me with you to witness these contracts? Great! That’s great. Thank you. ”

“It wasn’t a scam. It had honorable intentions.”

“Am I supposed to believe that? Honestly.”

“Every truth is ultimately one man’s opinion versus another’s. Fundamentally, the leases were intended to help many people.”

“Chief among them, who? You? Or the Progressive Energies Corp of Alta Vista Heights, California?”

“You should probably forget that name.”

Pualani was stunned into silence. Her heart didn’t know if she wanted to cry or to be the first to land a blow across Rinpoche Samdup’s face. 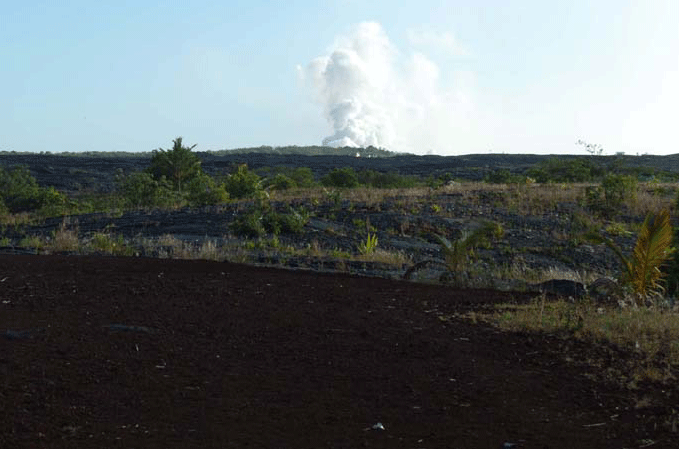 Down at Uncle Billy’s oasis, a kipuka in the heart of the Great Flow, Peter Pualoa was pushing for bodily damage. Auntie Lulu, wrapped in a deep sea colored pareo from her torso to her knees, and adopting the tone of her cousin Pastor Grace, urged restraint. “At least until we know for certain what he's done.” In the back of her mind there lingered a conversation she’d had with Prudence the day they sorted through Uncle Manu’s books down in the cottage. Prudence had warned Lulu about Kyle Weatherly. Preferring to allow people to reveal themselves before arriving at an assessment of them, however, Lulu suggested at the time that the self-anointed guru may have changed. It seemed readily apparent now that she should have listened to Pru. Manu used to always say, and now the words were reverberating in the disquiet of her mind, "Ask Prudence. She knows."

Uncle Billy argued that the kingdom of Hawaii doesn’t recognize the paper that those contracts are written on and therefore they were worthless. For everyone’s benefit and safety, the only thing the crook had to do was rip them up in front of the people who’d signed them. “Everywhere there are cameras. We can take a video of it, proving.”

“True,” said Peter Pualoa, “but what about the insult? Once again, someone comes to Hawaii with their mainland ideals and their mainland greed, and they try to take advantage of the poor savages who live here. How long before the Kingdom of Hawaii does something about that? What will it do to match my fists?”

“We can lodge a complaint with the State of Hawaii,” offered one of the relatives.

“Pah!” Peter Pualoa spit. “The useless State of Hawaii. Filled to the rafters with people like this Rinpoche.”

Pastor Grace spoke up after some deliberation. She had, after all, been in collusion briefly with the Rinpoche. But after some discussion with her husband, and a good deal of negative feedback at a recent supper, replete with singed curtains in the kitchen, she canceled all agreements with the Rinpoche and became, along with Fishbone, one of the Rinpoche’s more vocal opponents. “Probably,” she said carefully, “if the transactions were fraudulent, which they appear to be, the State of Hawaii will recognize that and we can file a class action suit against him and the exploration company.”

“Who’s to pay for that lawsuit, huh?” Peter Pualoa demanded.

This went on for some time, a seesaw discussion between going after and taking down, until Uncle Billy finally rose from his white plastic chair, having let all sides of the argument simmer in his brain. “It’s been decided.” He looked around the dozen or so people sitting and milling about the round wooden table. “Let those who have been slighted take the matter into their own hands. Either with a pen, in order to file a claim, or with a fist, to do as they see fit. Let each of them decide for themselves what is pono, and to live with the consequences of their decision.”